Maintenance - what you do between races

Any aspiring racer has heard the old saying "In order to finish first, you must first finish".  Part of that is having a reliable car - which means maintenance.  You should arrive at the track ready to race - not with a list of things to do.  So, in preparation of the next race at Mazda Raceway Laguna Seca, I'm doing some preventative maintenance.

Differential Oil
My buddy Brandon (new owner of the Sharpie Spec Miata) stopped in to watch and help me change the oil in my diff.  It had 3 long race weekends on it along with some street driving to/from the track.  Some people recommend changing the diff oil after every weekend.  Some say to change it every 2 weekends.  Everybody seems to have an opinion on this but no one seems to have any data.  I tried searching/Googling for oil testing results but came up blank.  I've been using Blackstone Labs. for oil analysis on my RX7 and street cars for a while so I figured I'd get my diff oil tested.

I bought a quart of 75/90 Neo Synthetic Gear Oil locally at my favorite Mazda/Rotary shop - Rotorsport in Santa Clara and proceeded to change the oil. As usual, I made a mess of myself changing the diff oil and accidentally spilled the sample I took.  I hate diff and transmission oil.  It smells terribly!  Next time...

If any of you out there has any data on diff oil and oil change intervals for the Miata, Please share.

The engine oil (Redline 30 weight Race oil) only has one weekend on it and it looks good so I'm going to wait another race weekend before changing.

Brakes
At the last race weekend, my front brake pads had worn to the backing plates.  Thankfully, I had a spare set of Hawk DTC60 pads and replaced them at the track.  I thought the wear pattern on the front pads was a bit odd.  The driver side inner pad was worn more than any other pad.  I should have taken a pic but wound up throwing them in the trash.  I didn't have any grease for the caliper pins so I thought it would be a good idea to freshen the grease on the caliper pins.  It is important to the function of the brakes that the caliper pins are properly greased.

Here is a pic of the caliper pins that I am referring to.  It is partially removed in this pic.  There is one at the top of the caliper and another at the bottom. 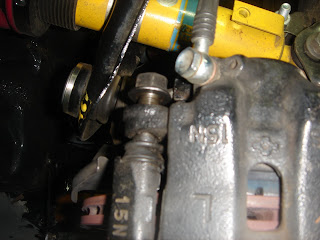 This is what the caliper pin (its actually a bolt) looked like upon removal.  Not much grease on there eh? 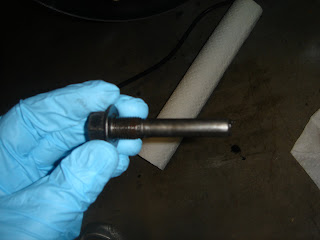 I had bought some CRC Brake and Caliper Grease from the local auto parts store so that I'd have it in the future.  This stuff has moly and other good stuff that is supposed to be good for brake caliper grease.  I added this to my list of stuff to bring to the track so that I'll have it if I ever need it again. 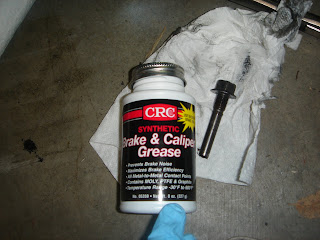 I lubed it up liberally. :) 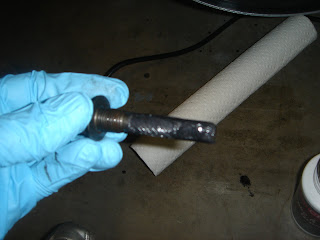 I re-installed the pins and torqued them to spec.  The top bolt torqued easily.  The bottom didn't seem to want to hit the limit so I gave up when it felt pretty damn tight. :)

Things to do while you are there - Inspect
Since I had the big spin at my last outing, I thought it would be a good idea to check that everything is still tight and do a "nut and bolt check" of the car while the wheels were off.  Actually, given the fact that I had my car, suspension, subframes, engine etc removed and re-installed during the build last year, it is a good idea for me to re-check the torque settings anyway....

What you basically do is get the torque ratings from the Factory Service Manual or other source and check that the bolts are tight to the correct torque setting.  If you don't have a torque wrench, get one.  I have a cheap one from Sears.  Randomly tightening bolts w/o knowing if they are already tight enough is a recipe for stripped bolts and expensive repairs.

Guess what?  Some of the bolts were loose.  The suspension bolts at the bottom of the shock and at the upper and lower A-arms were all tight.  So were the caliper to spindle bolts.  However, the nuts and bolts at the front subframe were not tight enough.  I rectified that situation and also re-torqued the engine mount bolts on the engine subframe.  Here is a pic of the nuts and bolts I am referring to.  The first photo is of the 2 19mm nuts behind the upper A-arm.  The second photo is of the 2 14mm bolts at the rear of the subframe. 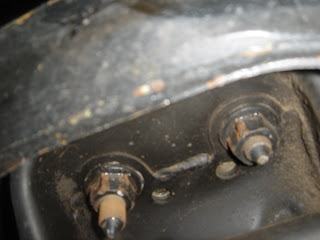 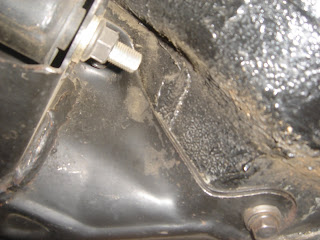