Should you run a thermostat in Spec Miata?

This is a question that arises often.  I've read all the threads on various forums and opinions on both sides of the question.  Some say get rid of it that it is a failure point.  Some say that the cooling system needs the slight bit of restriction of the thermostat to prevent against boiling the water in the head.  I did some research into this topic and figured I'd share.

Some background on the Miata thermostat
The Miata uses a generic, common sized thermostat with a 52mm / 2 1/16" diameter.  NAPA was the only parts store that would give me a hard time when I ask for a generic 2 1/16" thermostat in 180* or 160*.  Every other part store would only look up the Miata and sell me whatever the stupid system said was the one.  Just walk into NAPA and ask for a generic thermostat in 2 1/16" and 180* temp with the part/reference number of 142 and they should be willing to help you.

Let's get to it
Let me start by sharing some facts from a well known Spec Miata builder and engineer Dan Tiley of Ti Speed Engineering.  He was also a Development Engineer and NASCAR.  Refer to this thread:
http://forum.specmiata.com/cgi-bin/ultimatebb.cgi?ubb=get_topic;f=44;t=003785;p=0#000001

Dan's comments:
I absolutely disagree with the idea of targeting your run hot coolant temperature at 160, 170, or even 180. There are several reasons for this. Your Mazda engine has an iron block and aluminum pistons, which have very different coefficients of thermal expansion. The cylinder diameter will "grow" fractionally at a rate of approximately 7e-6 units per degree F. The pistons grow at nearly twice the rate at 13e-6 units per degree. What this means is that your the clearance between the piston and cylinder wall is larger at lower temperatures. My dyno tests have shown very repeatably with back to back runs that the car will make x HP cold, and will increase with each run and then starts to decrease again after 210, due to the ECU beginning to pull timing. To make the absolute most power, you want that piston to cylinder wall clearance to be as tight as possible. Of course, once the car starts heading for the 240-250 range, that clearance becomes 0 at which point the engine starts to try to make it's own clearance.

Target 195-205F for your running temperature. I've tapped into the stock Mazda CTS (Coolant Temp Sensor) and read this digitally live on my on-board display, and note the temp while making dyno runs.


Focus on the bold text where he says that the target temp should be 195-205* F.  I exchanged a few emails with Dan on the topic.  He's a smart dude.  He races in the South East US where it gets hot and humid in the summer.  At one point he used to run a thermostat.  Now that the front of the pack of the top prepped car drafts and bump drafts, he has found that he needed to remove the thermostat in order to run optimal temps.

So, like I said, it depends - on your water temps.  Install a coolant / water temp gauge on your car to ascertain what your operating temps are and determine what you should do.  I installed an Autometer Elite gauge with Peak and Hold functions measuring water temps from the back of the head - which is the hottest point in the Miata's cooling system.

If your temps are too low, run a thermostat so that you can get the operating temps up to the target 195-205* F.  If you see temps too high with a thermostat, test without the thermostat and see where your temps are.  I have done this testing here in northern California running at Thunderhill, Sonoma and Laguna Seca raceways.  I'll share my results.

In my car, running the OEM thermostat, a Koyo 52mm radiator, starting position around the middle / back half of the pack, minimal drafting, northern CA temps ranging from ~60-90* F in dry air, I would typically achieve operating around 210-215* F.  Sometimes as high as 220* depending on ambient temps and the length of the session.  30 minute sessions resulted in slightly higher temps (215+) toward the end of the session.  On hot days, I could feel the power decrease as temps rose and the session or 20 minute race.  The Miata ECU will pull timing as engine temps increase.  You can feel the power difference.

This is what the OEM thermostat looks like.  Note that I removed the 'jiggle pin' which would typically have occupied the space between that arm on the right and the small right protrusion on top. 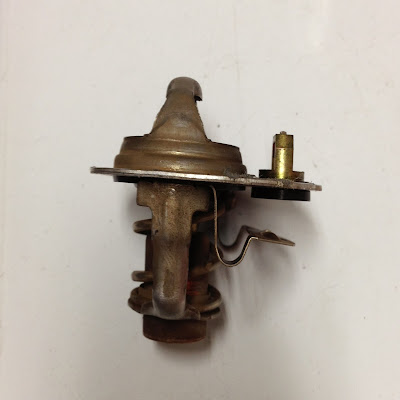 NAPA 160* thermostat
I briefly experimented with the NAPA 160* thermostat.  This is sometimes referred to as the #42 NAPA thermostat since that is their part number for it.  I read a bunch of people on miata.net talking up the thermostat and l tried it.  It sucked on my car in northern California temps.  The engine would not get up to temp - which means excessive wear and low power.  The cooling temps would barely hit 180* F on a hot summer day.  Regardless of what 1950s hot rodders say, those temps aren't appropriate for the Miata. 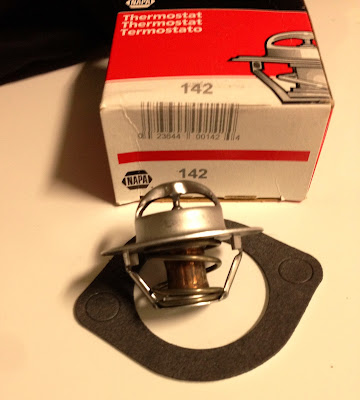 *Note: Do not use the crappy, paper thin generic gasket pictured above.  It won't seal.  Don't ask me how I know.... :(  Use an OEM or Fel-Pro gasket.  NAPA should have Fel-Pro.

The NAPA 180* looks exactly the same as the 160*.  If you have one installed in your car and are curious about what the temp rating might be, try looking underneath it like so.  This is the 160*. 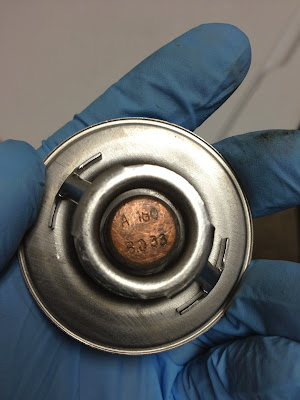 Comparing the 3 thermostats, it seems like the engine would typically run about 20* F hotter than the thermostat opening point when driving at race pace in mostly clean air - meaning I wasn't drafting lap after lap like some of the guys at the front do.

Now, all this will vary depending on your ambient temps, humidity and how much drafting / clean air you have in your races.  The point is that although some people say that thermostats should be removed, other say thermostats should be kept, others say only run the OEM thermostat; the final answer as it relates to your car, in your region, in your race conditions is going to vary.  So test and figure out what works for you.

If you do wind up doing some testing and can confirm what works in your region, please come back here and share your experience so others can be well informed.