I last posted about this in July.  Shortly thereafter, work got busy, summer happened, bought a house, moved, did some house renovations and I'm finally getting started on this project.

I started this project with a lot of research.  I'm fairly handy with a wrench but I've never opened a motor before so I educated myself about the rebuild process.  I'll make another blog post with helpful videos, posts, pictures and books and such that I used to educate myself but for now I'll focus on my progress.  While wrenching, I mostly refer to the Miata Factory Service Manual (aka FSM) and the Miata Enthusiasts Manual.

I bought an engine stand from Harbor Freight for $65 and got the engine situated using my engine hoist.  Also cleared some space in the garage so that I can work on this.  Here is my work space: 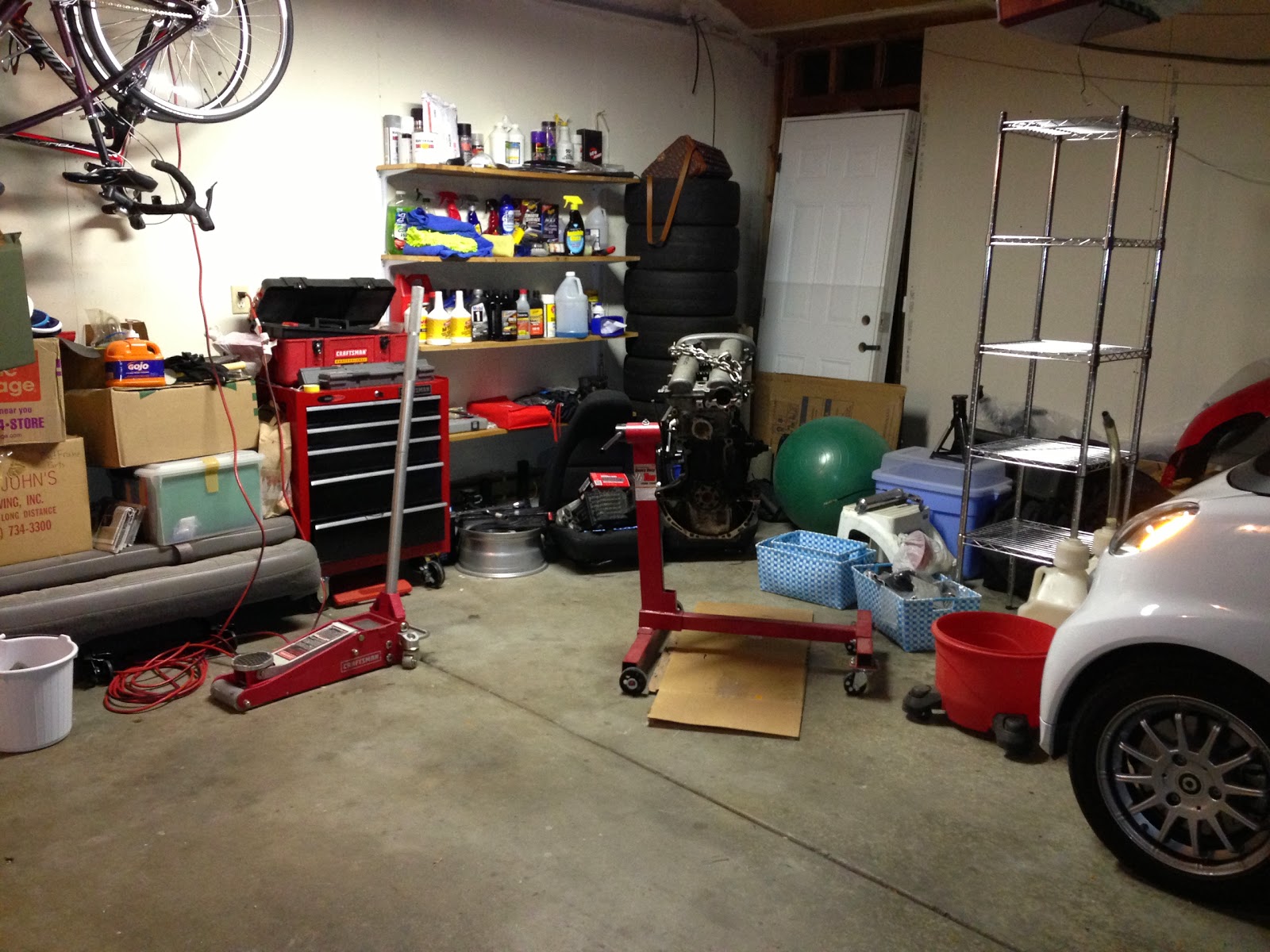 Following the FSM and the Enthusiasts Manual, I removed all the stuff on the front of the engine, the valve cover, head and oil pan.  All of this was easy as it was pretty detailed in the books and it is honestly pretty obvious how to get these parts off.  Progress was quick.  I made an effort to take pics of everything so that I could reference the pictures when putting the engine back together again.  I also tried to mark parts so that I could re-install them in the same position that I removed them from. 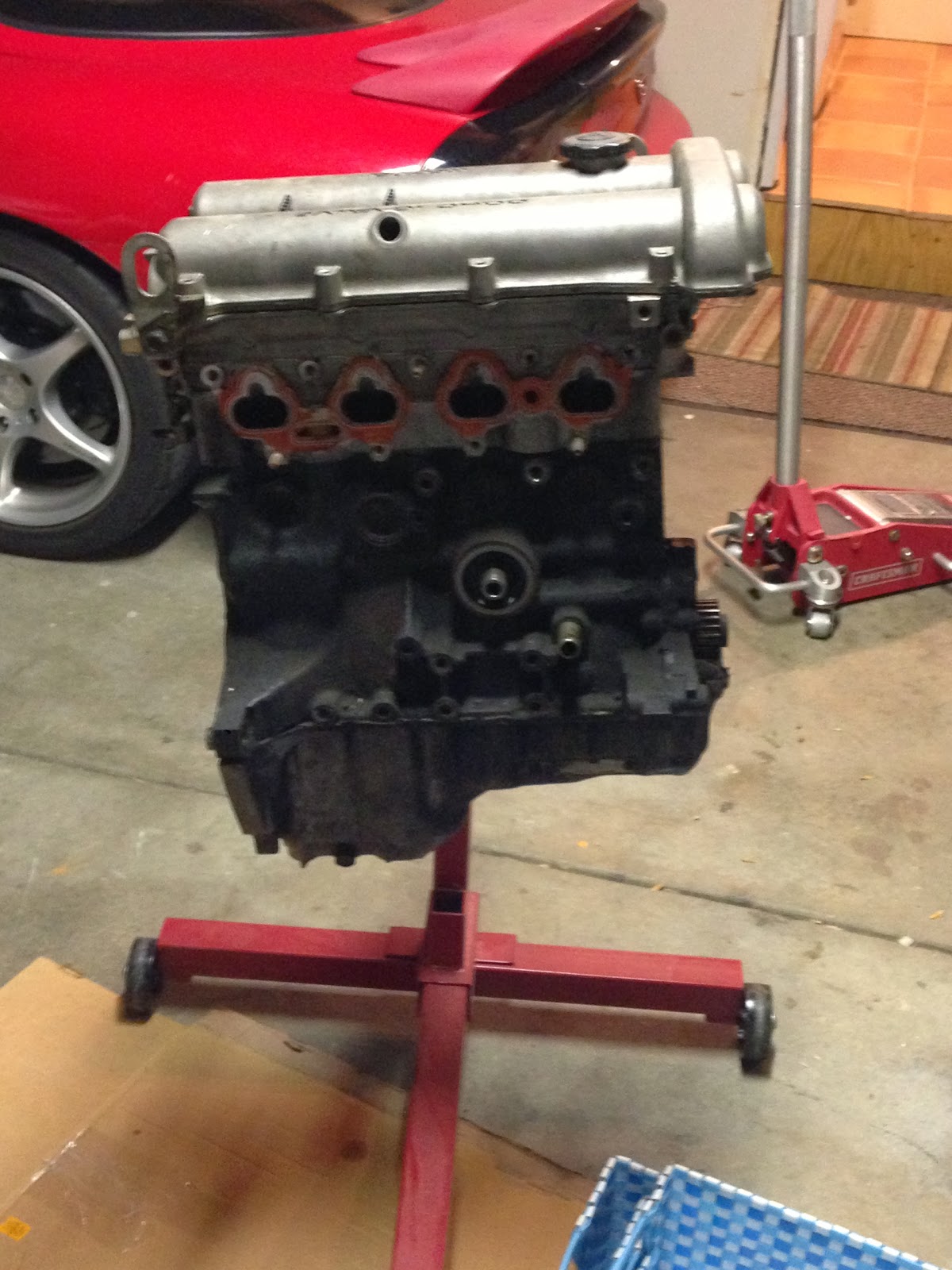 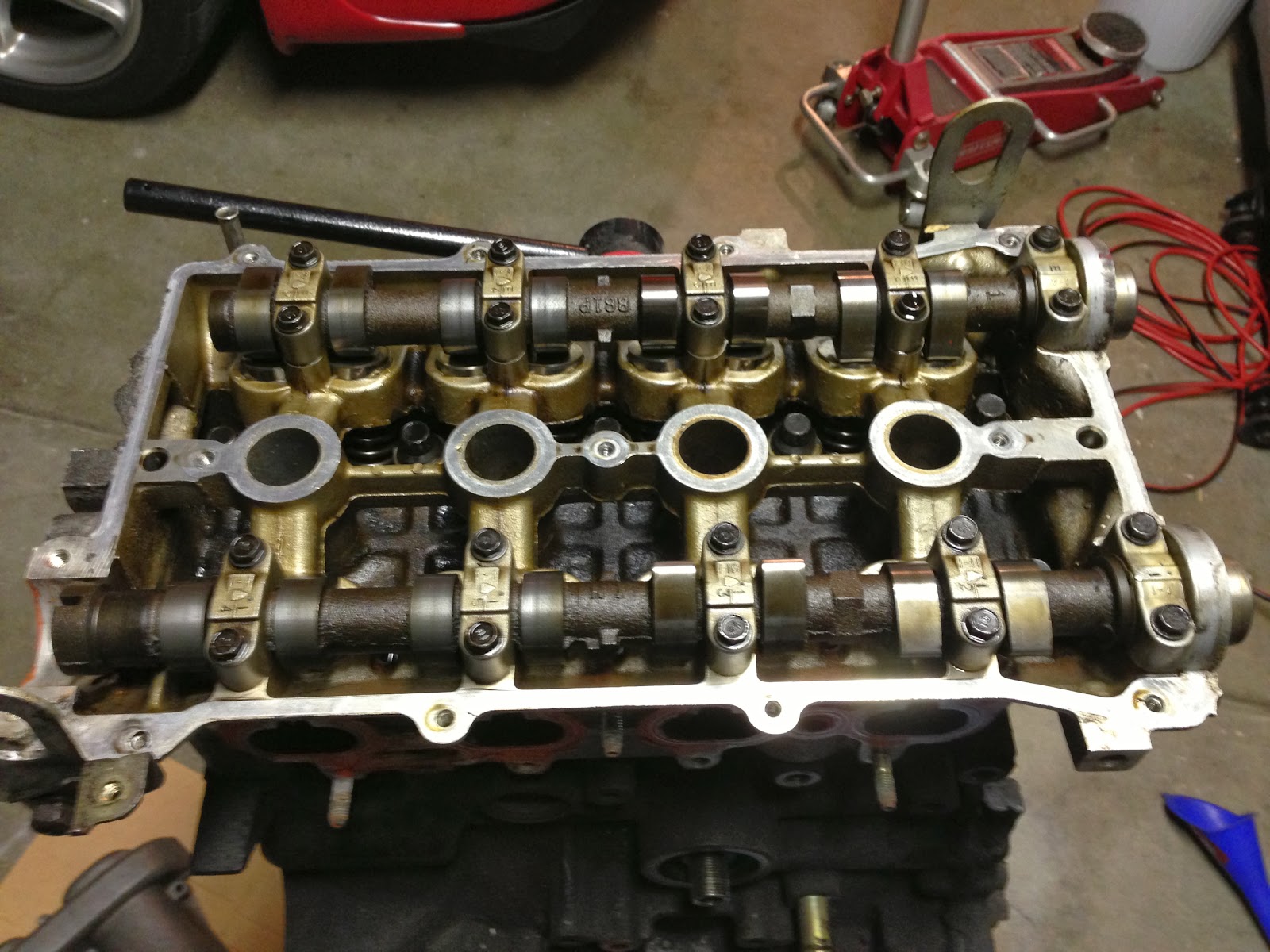 The camshaft journals are marked so didn't need to do anything here. 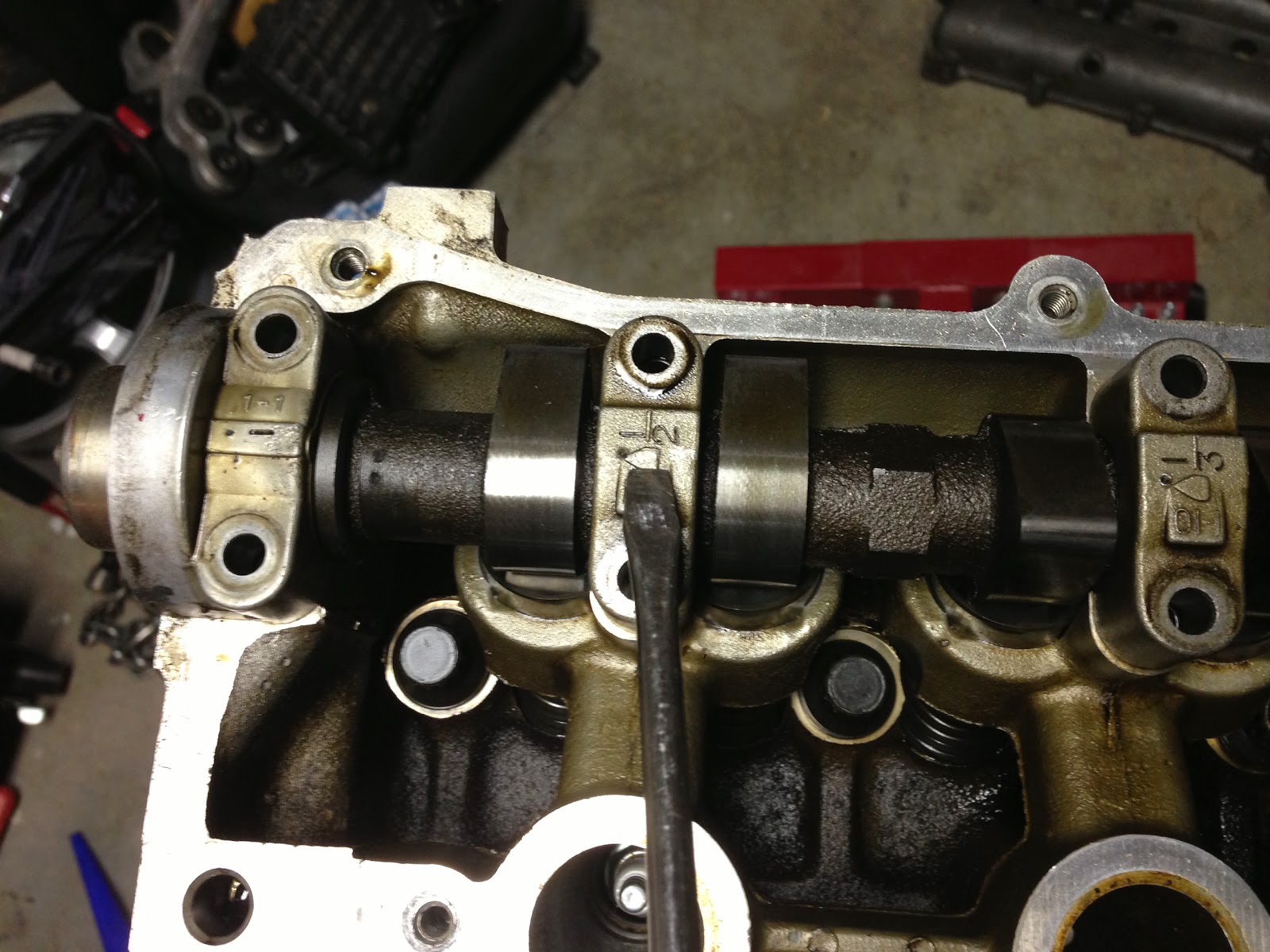 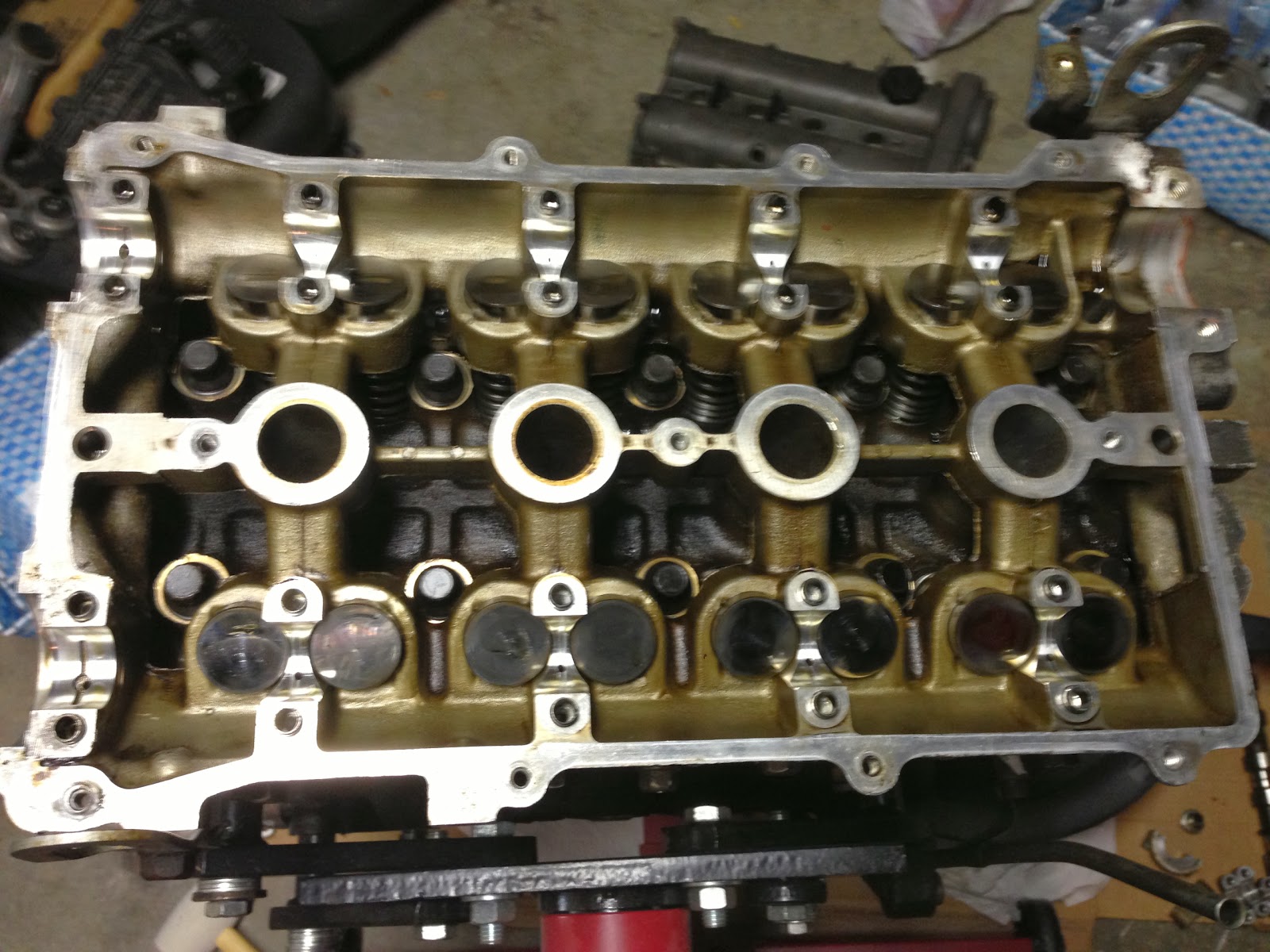 With the cam removed, the HLAs come off by hand.  I almost lost them when I started rotating the engine.  I got an egg crate and labeled the location that I removed them from. 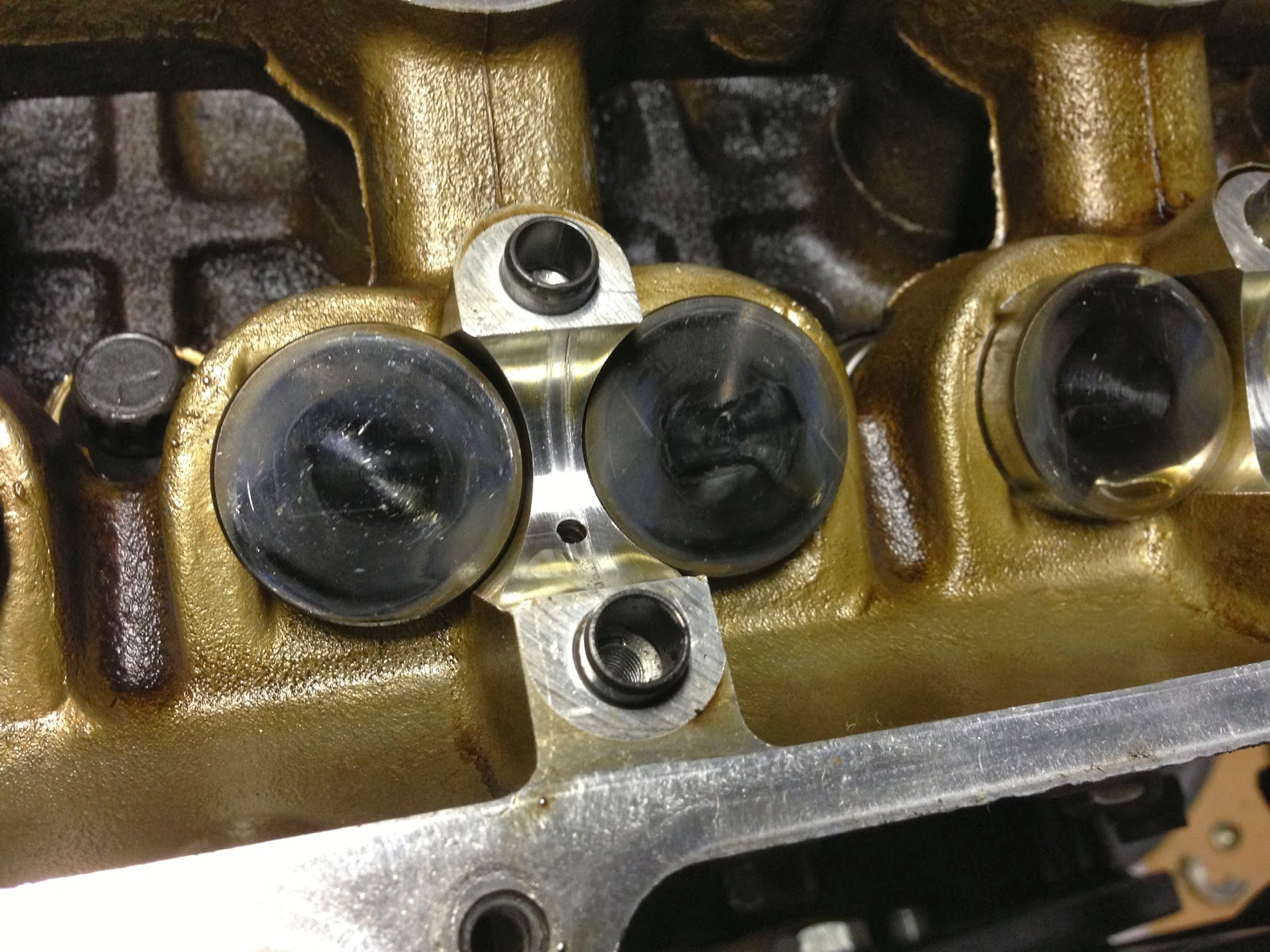 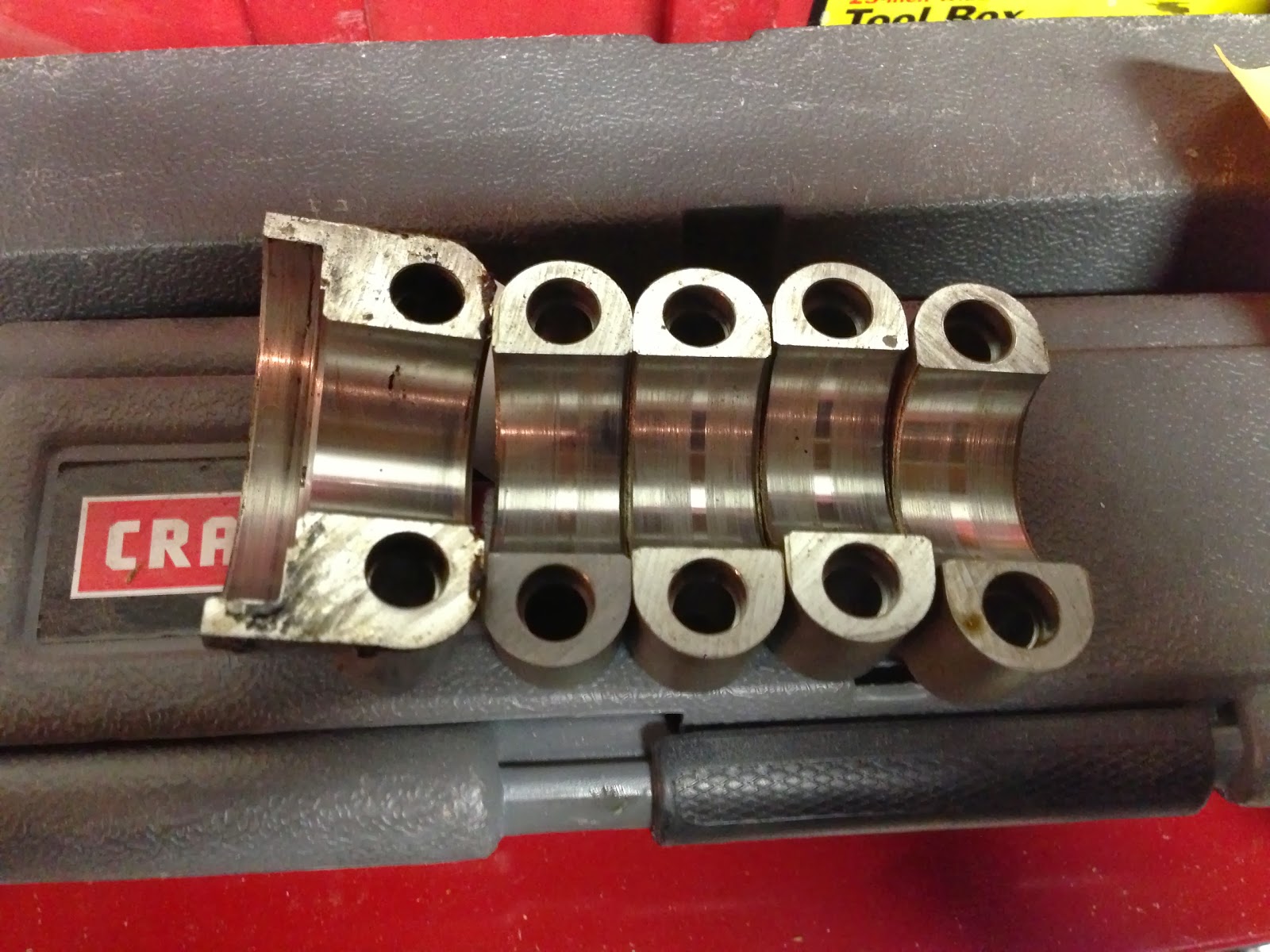 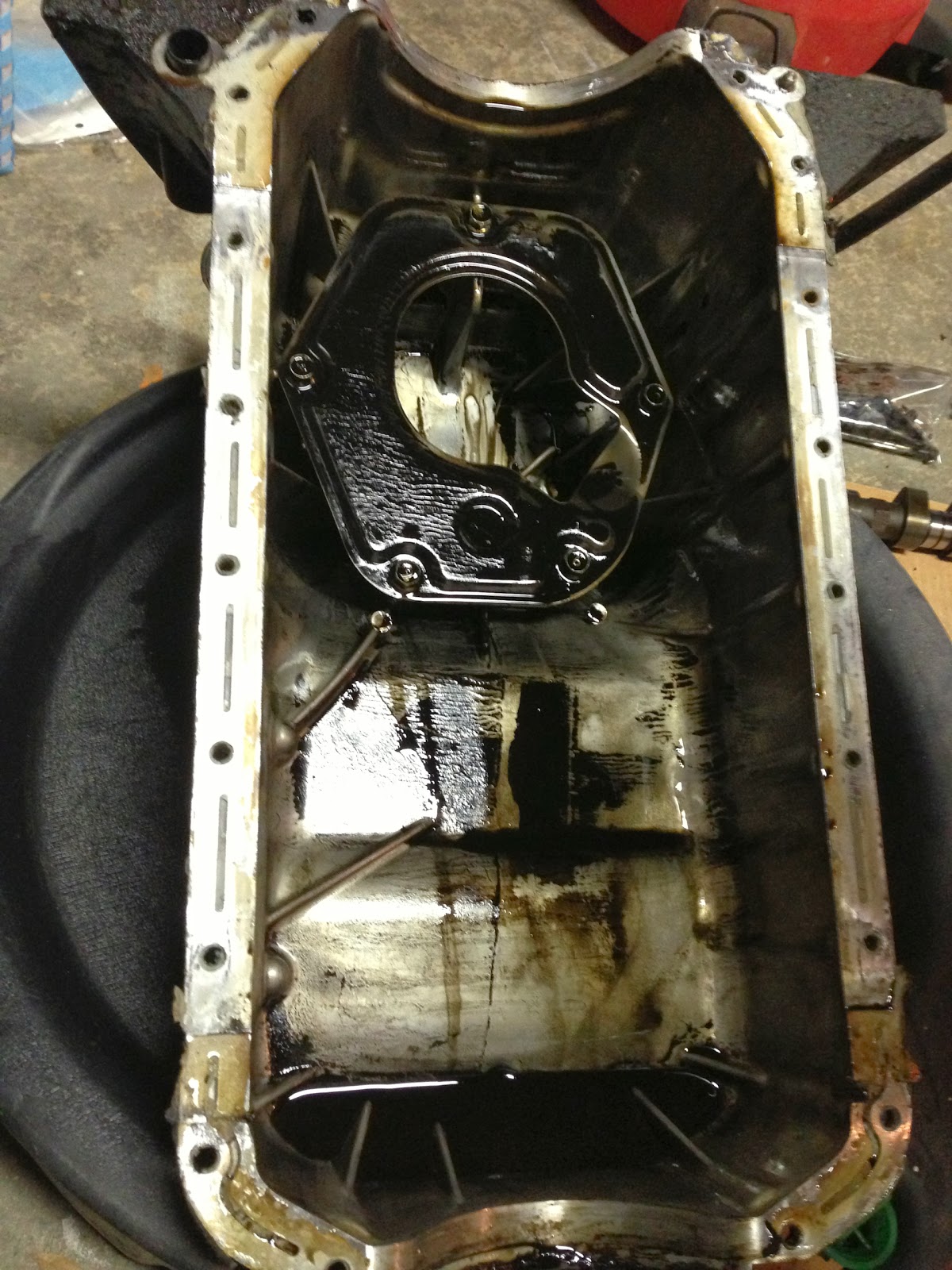 Some minor gunk (oil pan sealant?) in the oil pickup but mostly clean beyond that. 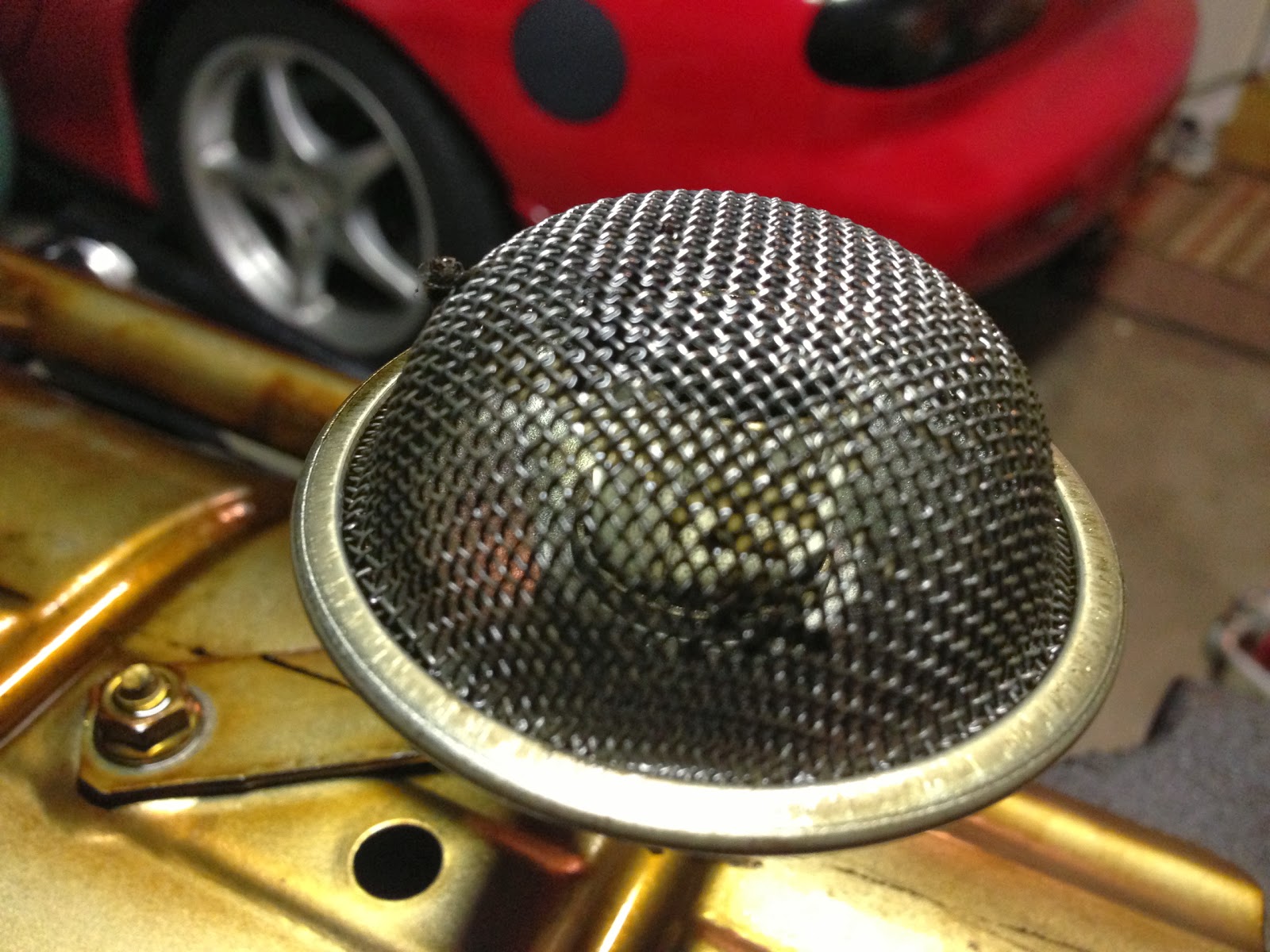 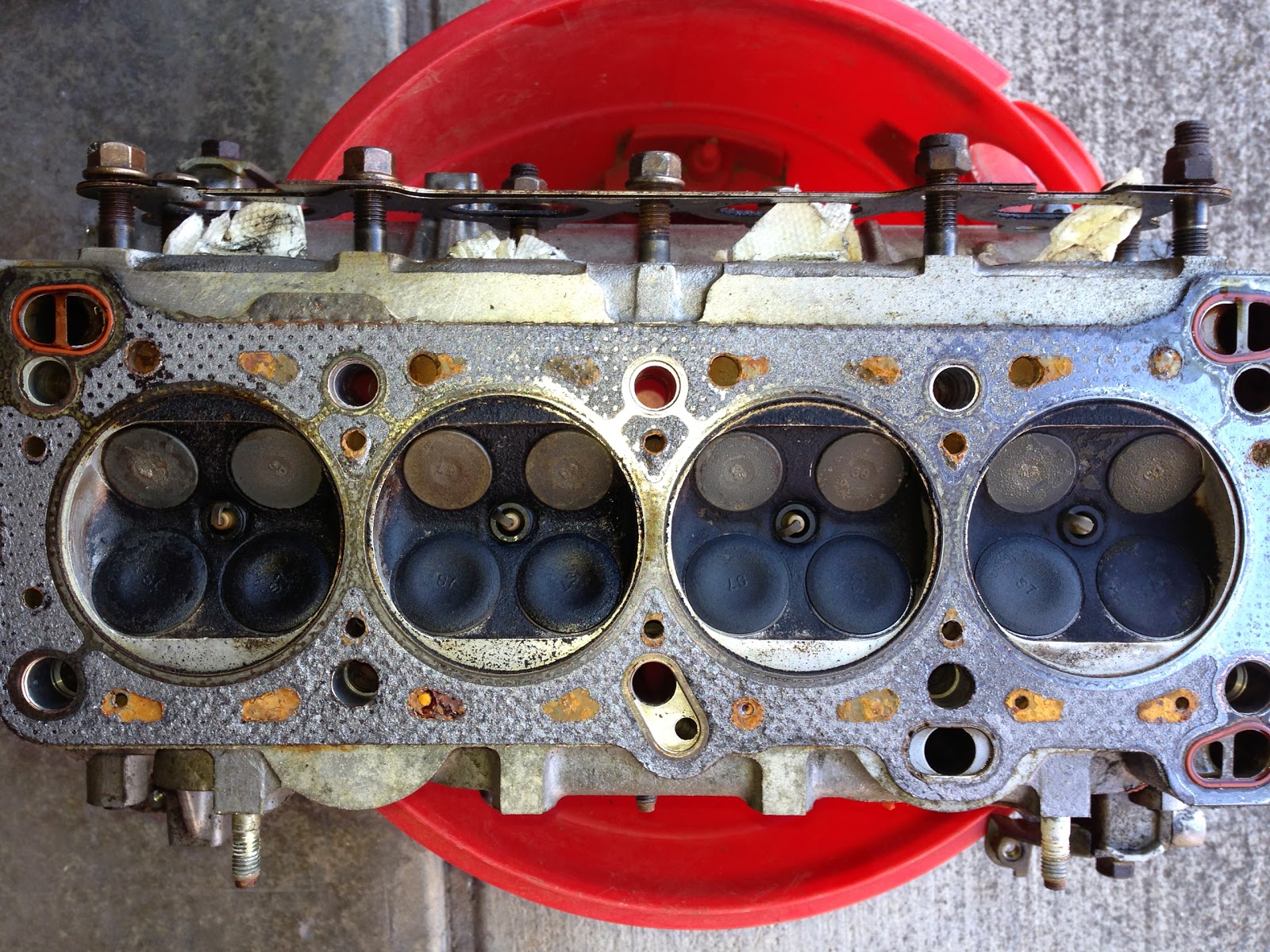 This is why you should you DISTILLED water in your coolant system and NOT tap water!  Those are mineral deposits from minerals in tap water from the previous owner's mechanic. :(  The cooling passages also have this crap. 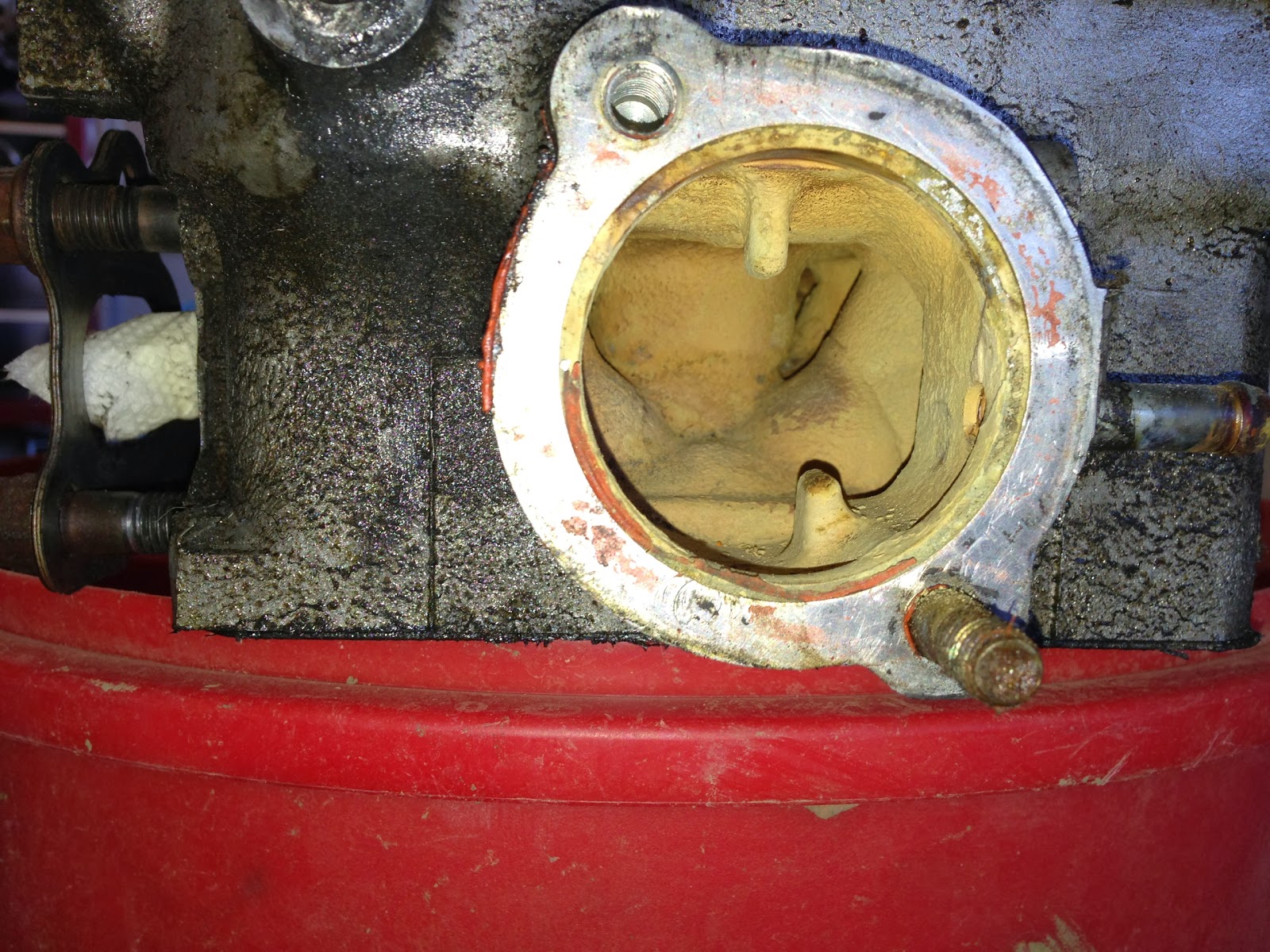 Pistons look OK from the top.  Carbon deposits on the top of the pistons.  You can see more gunk in the coolant passages too. 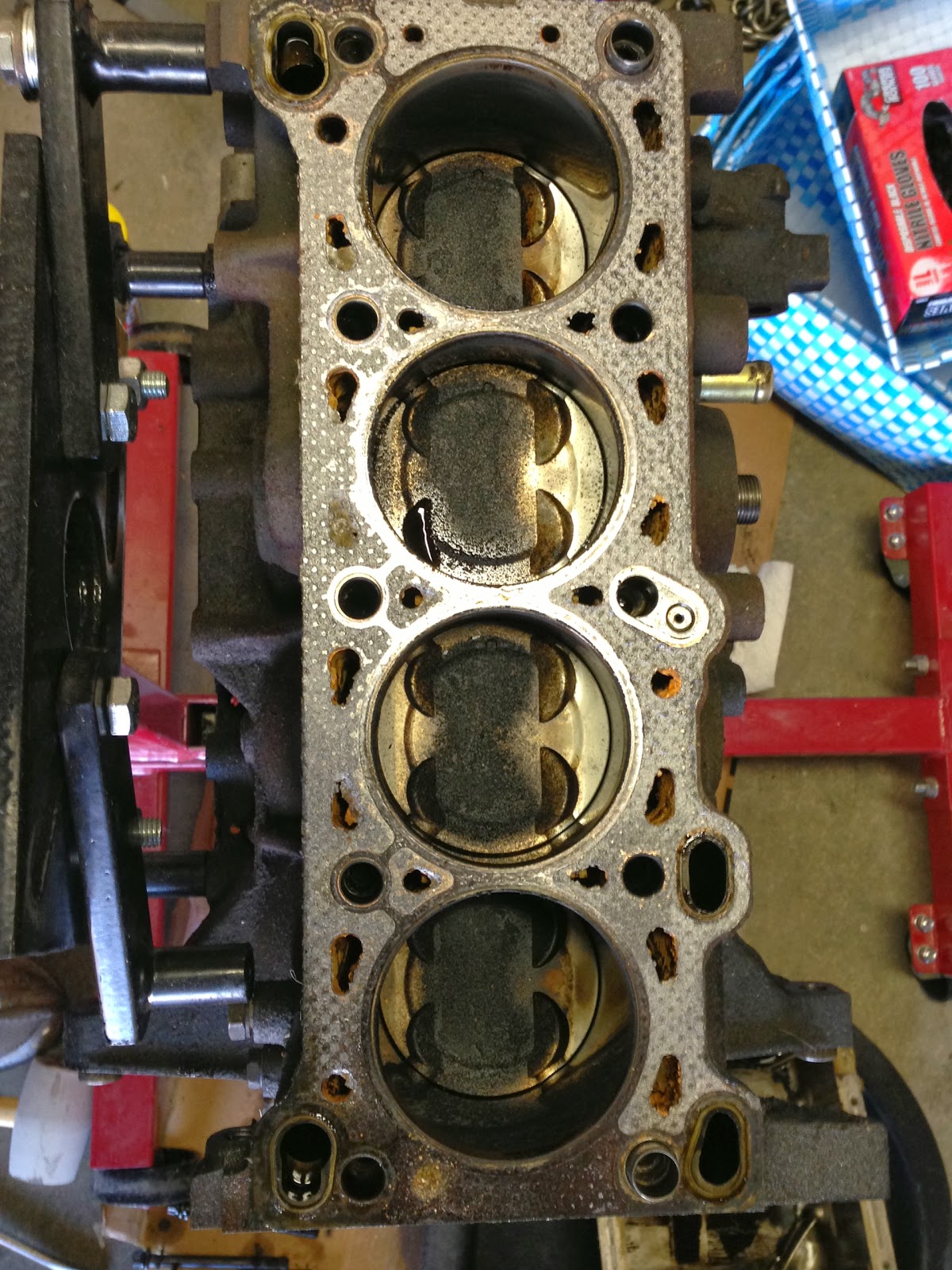 View of the underside. 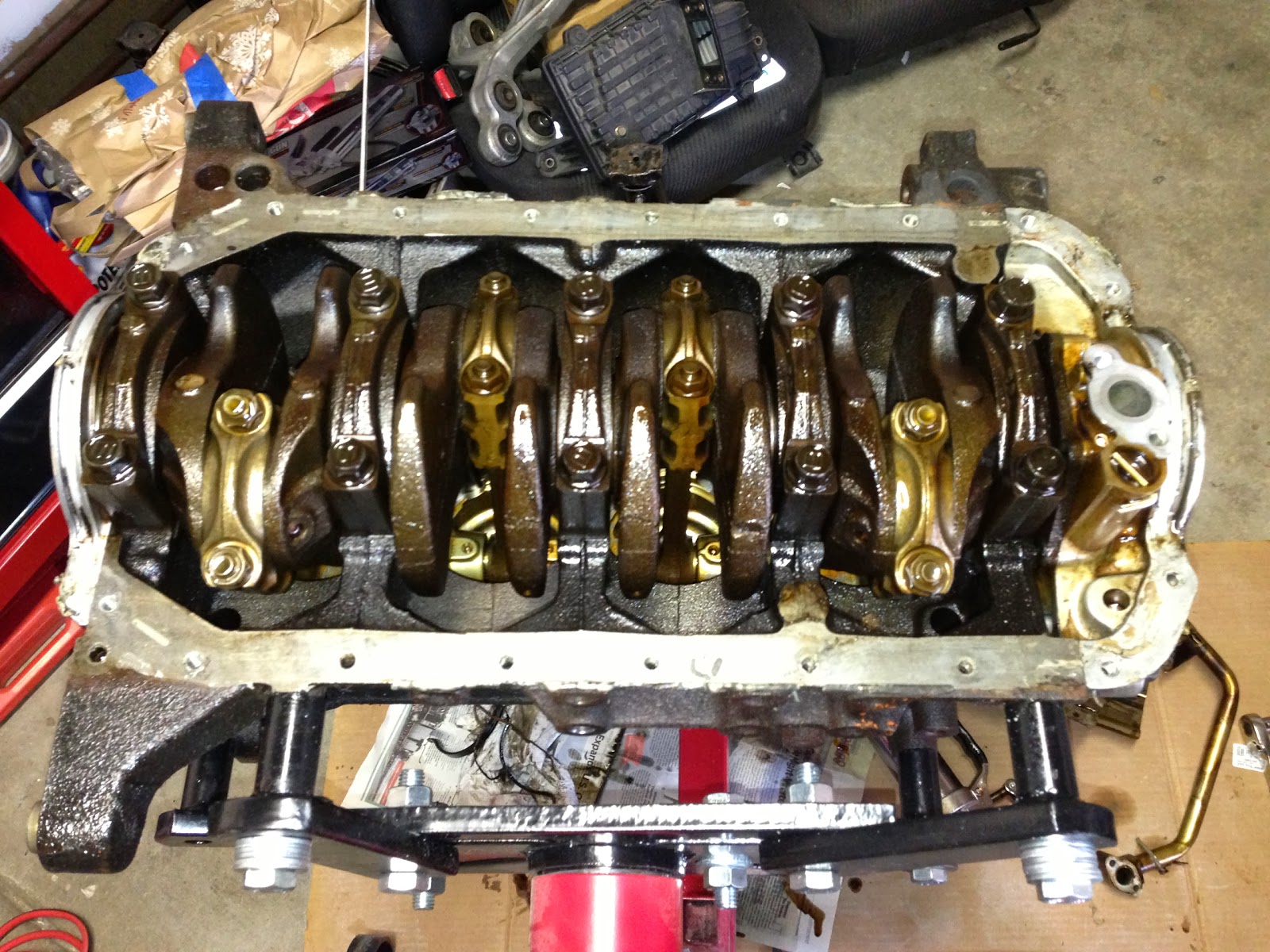 Removing the timing cog on a SNC 1.6 Miata

I was making great progress until I got to the timing belt cog.  It wouldn't budge.  I spent a good long time Googling about how to remove this bitch of a part and tried everything I read.  Some people suggested 3 prong gear pullers.  Tried a few different ones and they didn't work.  The FSM says that the proper tool is a steering wheel/gear puller.  I tried that too but the bolts included in the kit do not fit the threads in the timing cog.  I wasn't sure what I was going to do about this.... 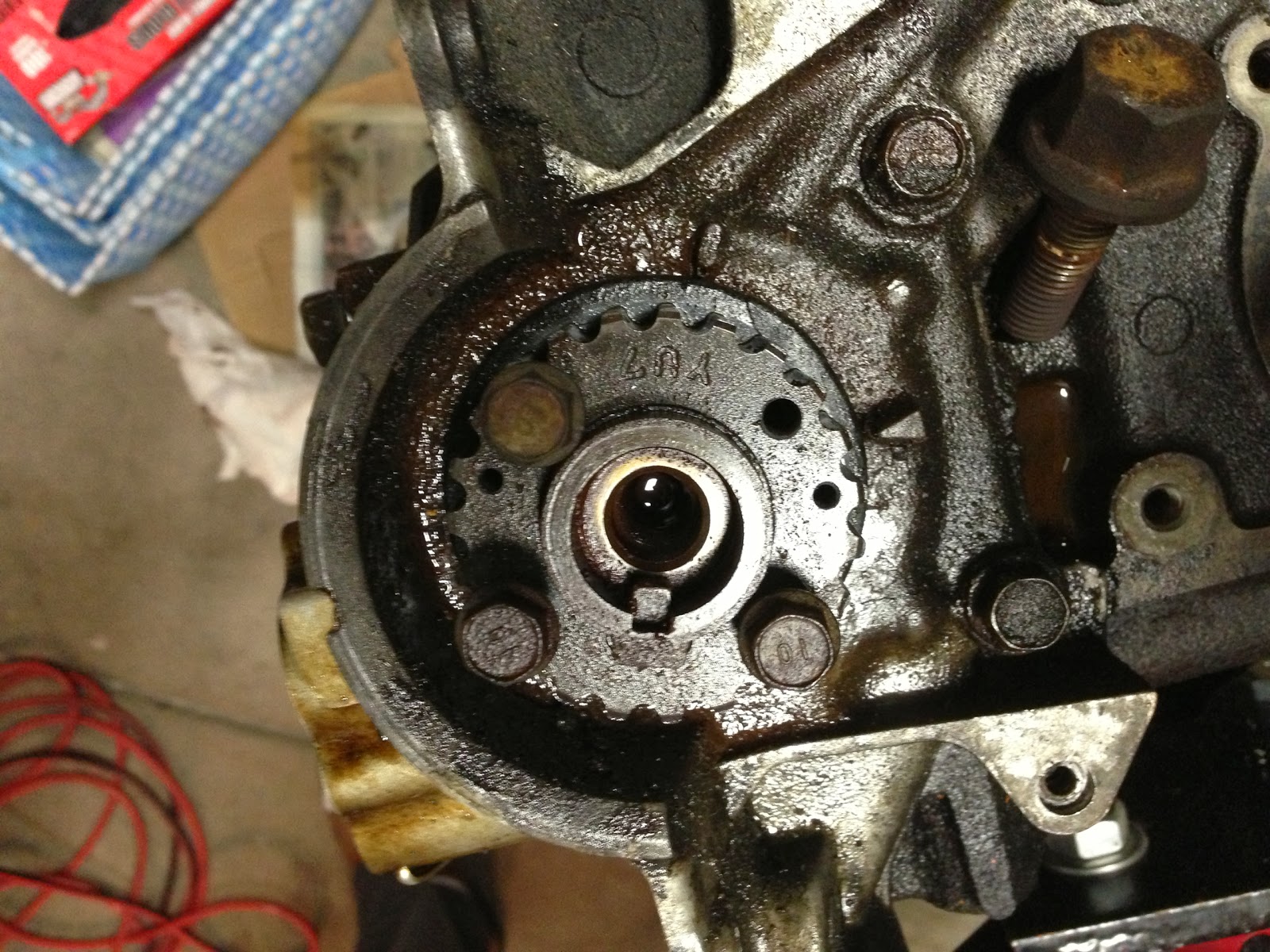 I wound up posting about my issue on the local Miata club forum (Bay Area Miata Drivers).  Thankfully, a fellow club member (and total stranger) from the local Miata club offered to lend me a tool he fabricated for this job.  So he mailed it over and long story short - it worked.

Here is the custom tool I used to remove the timing cog on the SNC 1.6 Miata.  I used the screw driver just to keep the crank from turning.  The timing cog fought me the whole length of the crank shaft but it did eventually come off.  Of course I broke it in the process while trying to manhandle / pry the damn thing off but I didn't plan on re-using it anyway.  I could now continue to dis-assembling the bottom end. 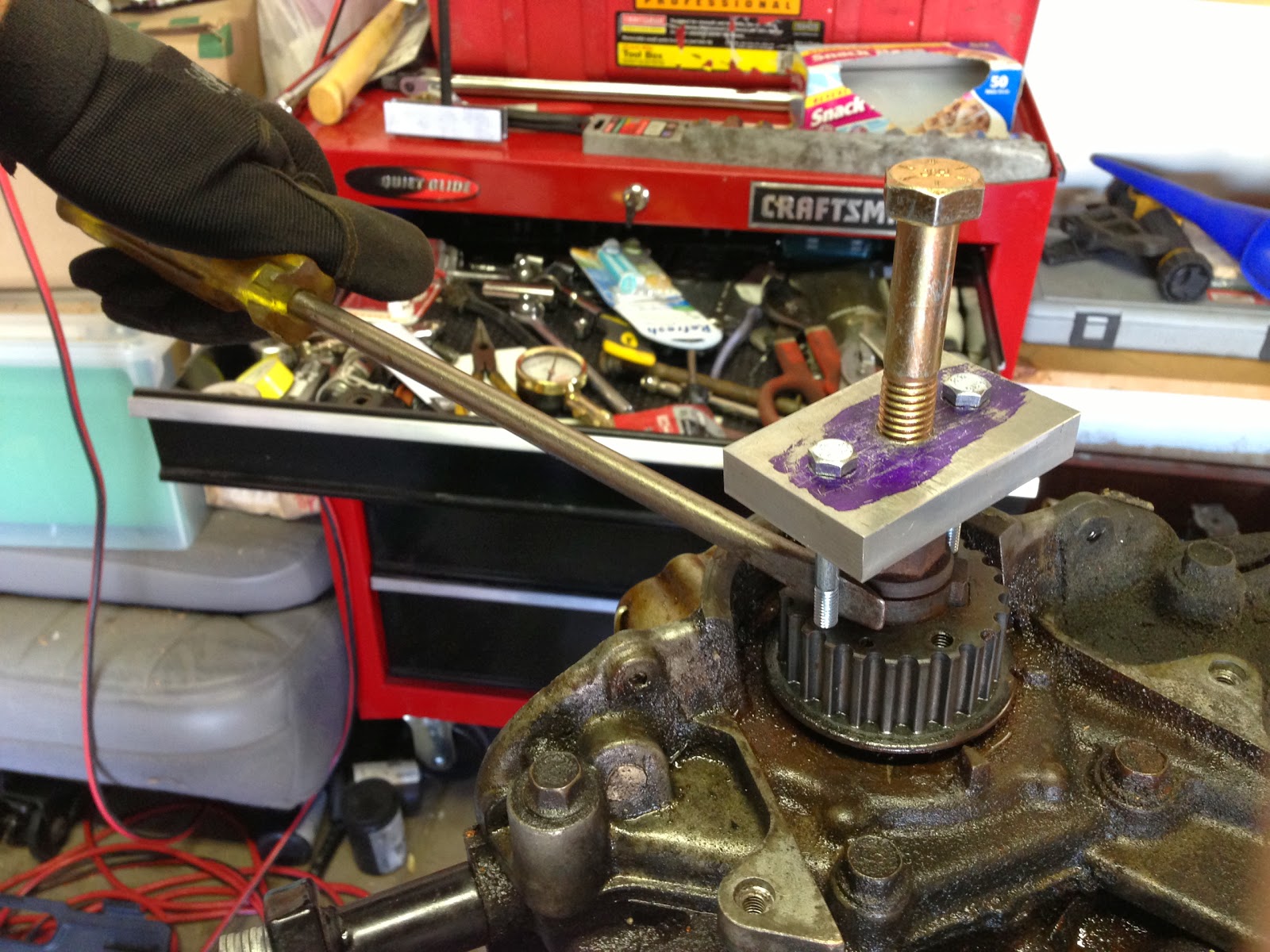 Pretty rusty and gunky as you can see: 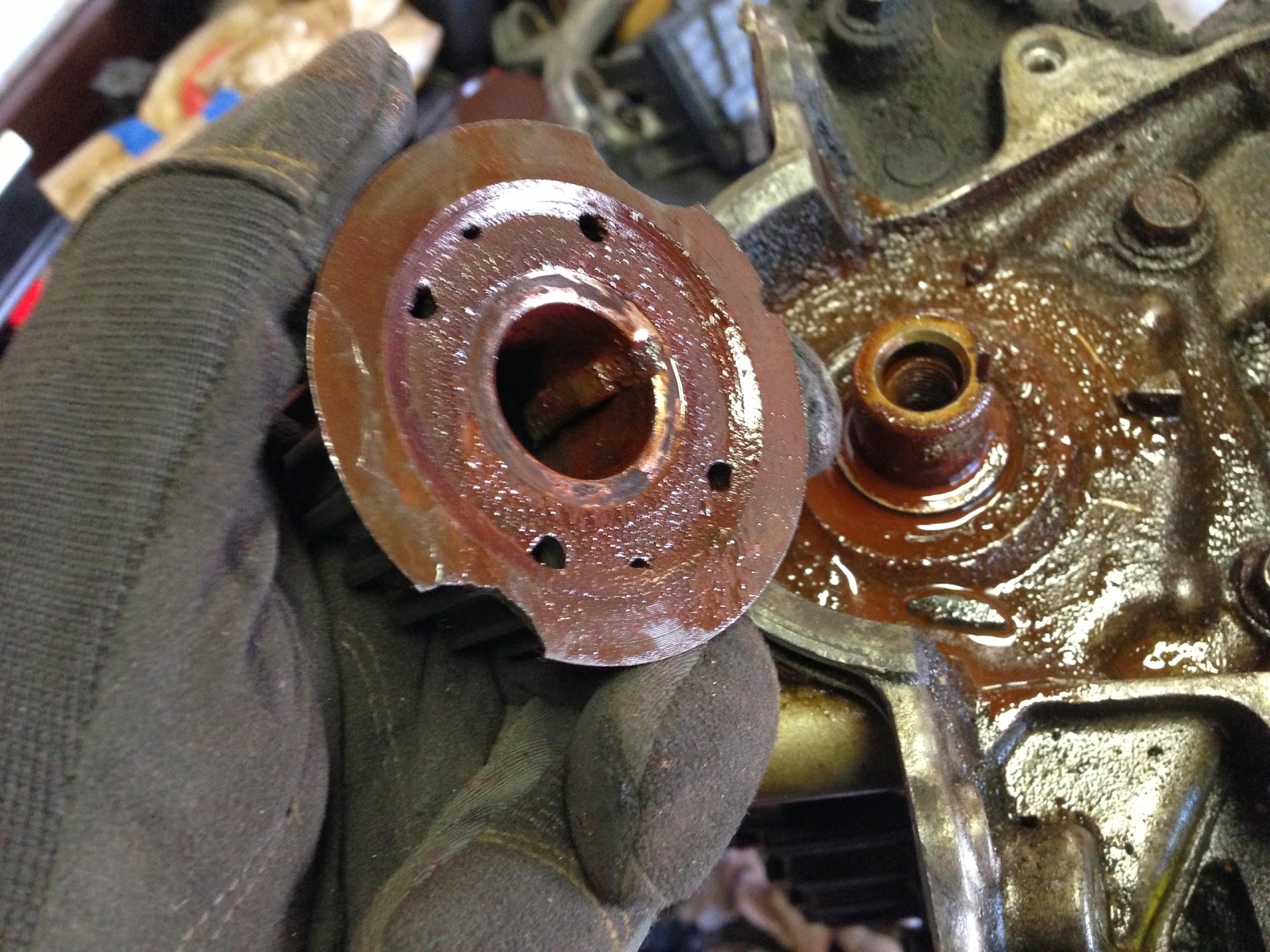 Here is is cleaned up and dried off from it's bath of penetrating liquid.  The keyway looks in good shape so I can re-use this crank. 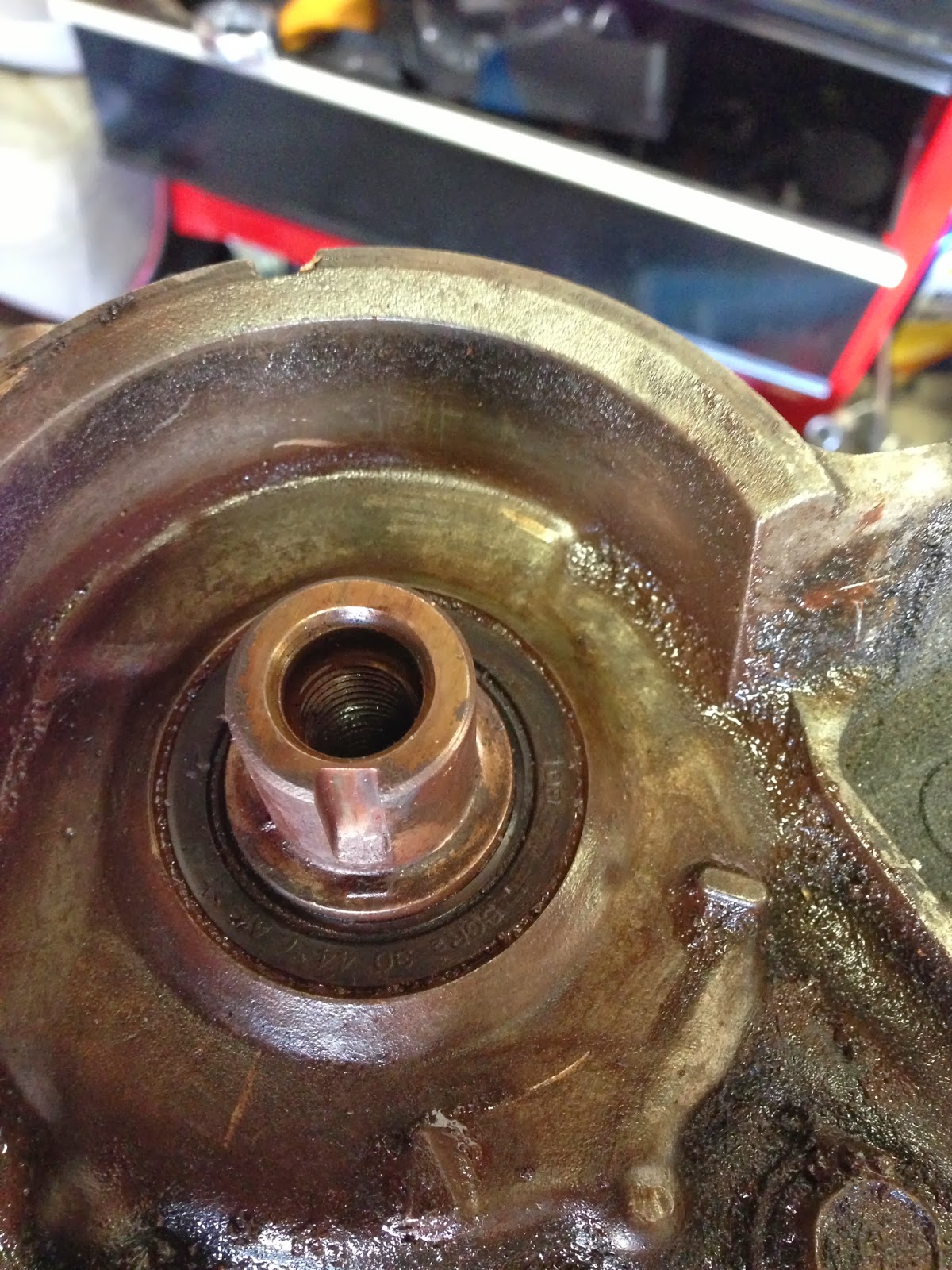 Dis-assembly of the bottom end

Things progressed quickly from here.  Following the dis-assembly procedure of the FSM, I removed the oil pump / front cover. 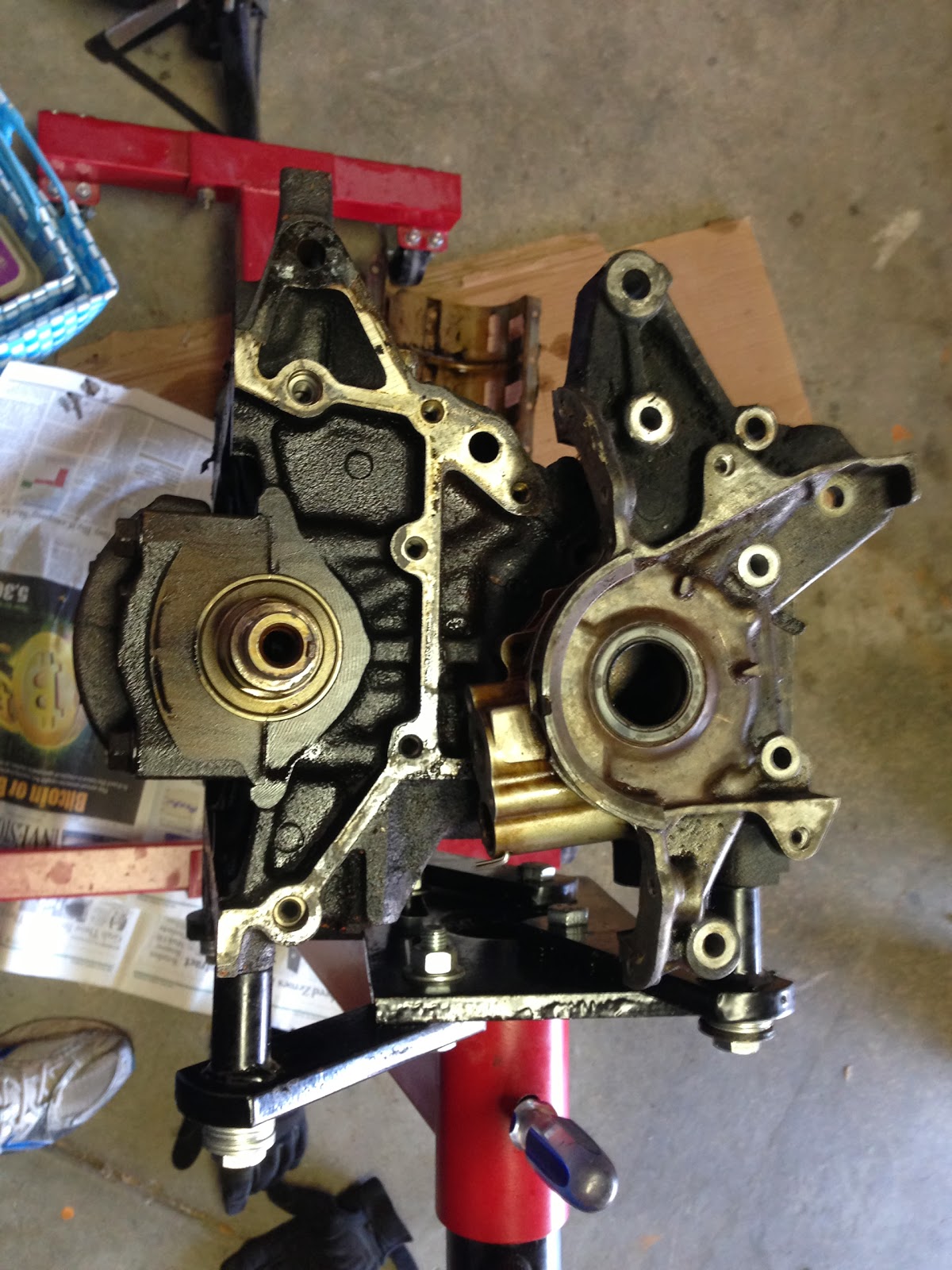 Then the rear cover: 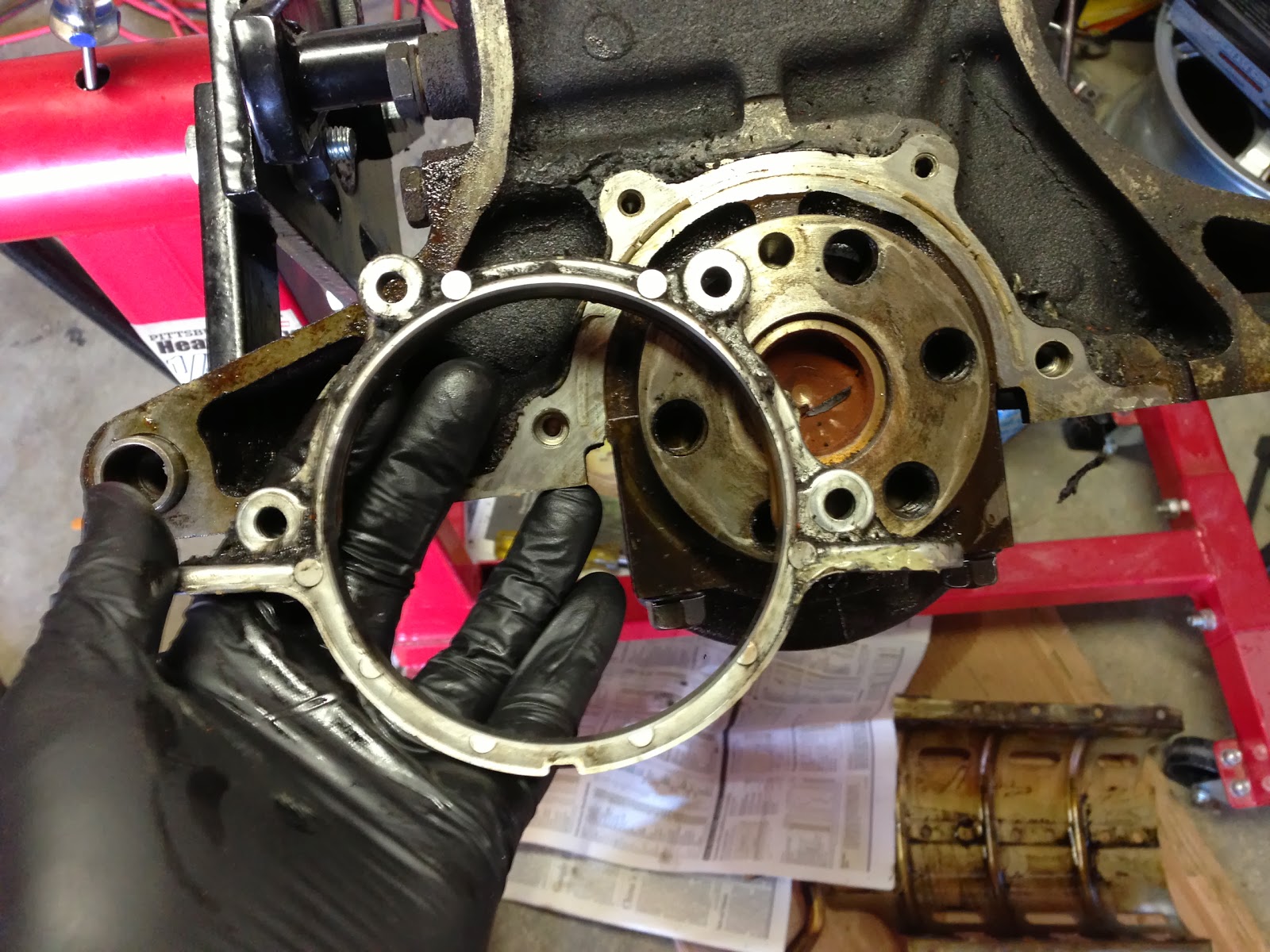 Time to start measuring.  The FSM and Enthusiast manual both suggested measuring clearances before tear down.  I figured it would be a good idea also so that I can compare clearances when I assemble.

I bought a feeler gauge and checked the clearances on the Connecting Rods and wrote down the measurements.  I had never done this before.  I had expected that the connecting rods would have a fixed position on the crank.  Turns out they move front and back along the crank shaft so as I inserted feeler gauges into the gaps, the connecting rod would move slightly allowing me to progressively insert larger feelers until such a point as the maximum range of the factory tolerances was met.  It actually took me a while to figure out what was happening so pay attention when you do it.  Turns out my clearances were within spec.  Goodie! :) 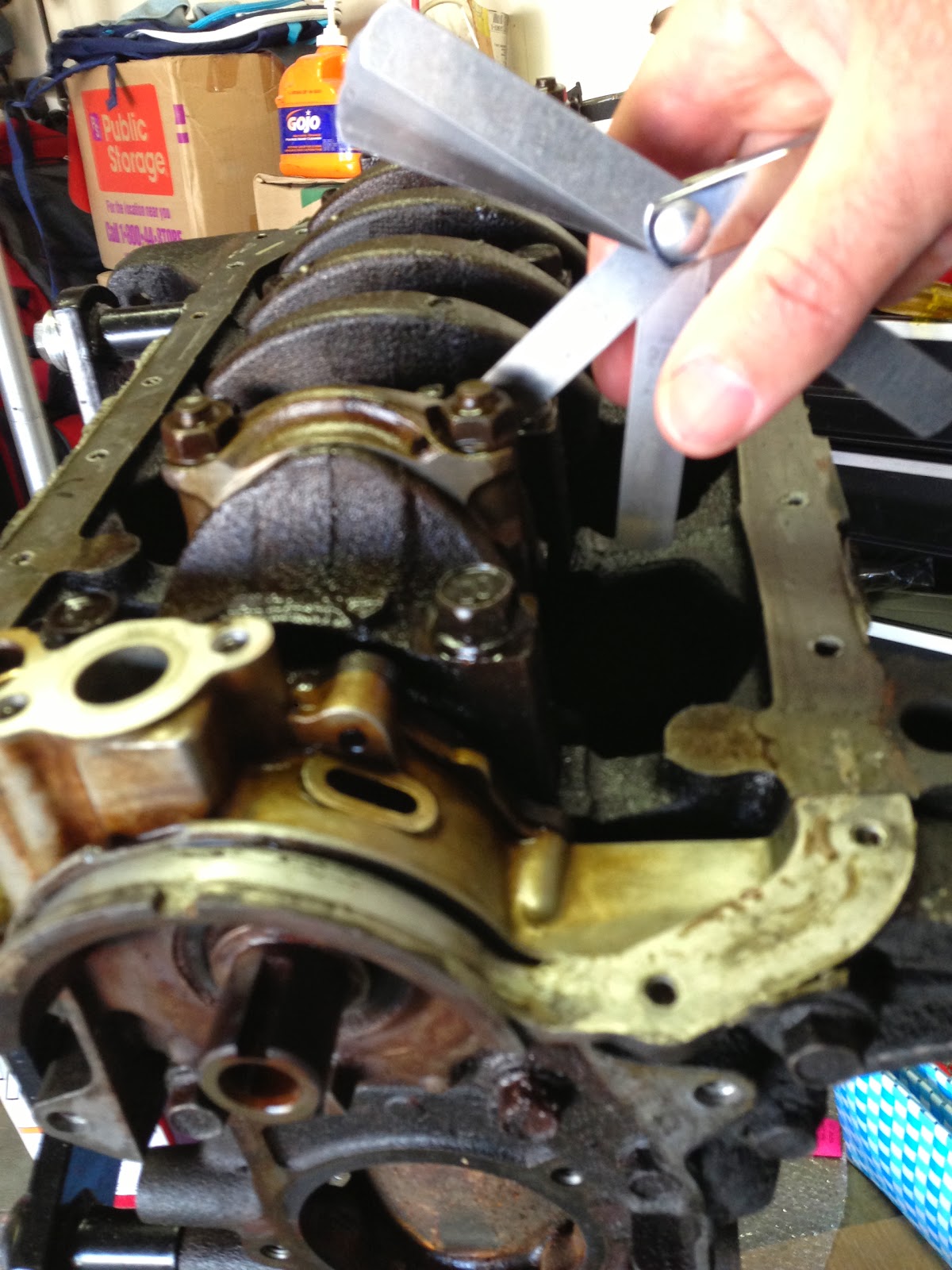 The FSM also said to use Plastigauge to check oil clearances on the connecting rods and main caps.  I was tempted to but I didn't have any and was making such good progress that I decided to skip that step and complete the dis-assembly.  I marked the connecting rods using a punch as the Enthusiast Manual suggested so that I could be sure to use that same piston and rod in the same cylinder.  I noticed that the main caps had unique numbering so I noted these numbers in my note book.  The FSM and Enthusiast Manual specifically state to NOT attempt to punch these caps so take note. 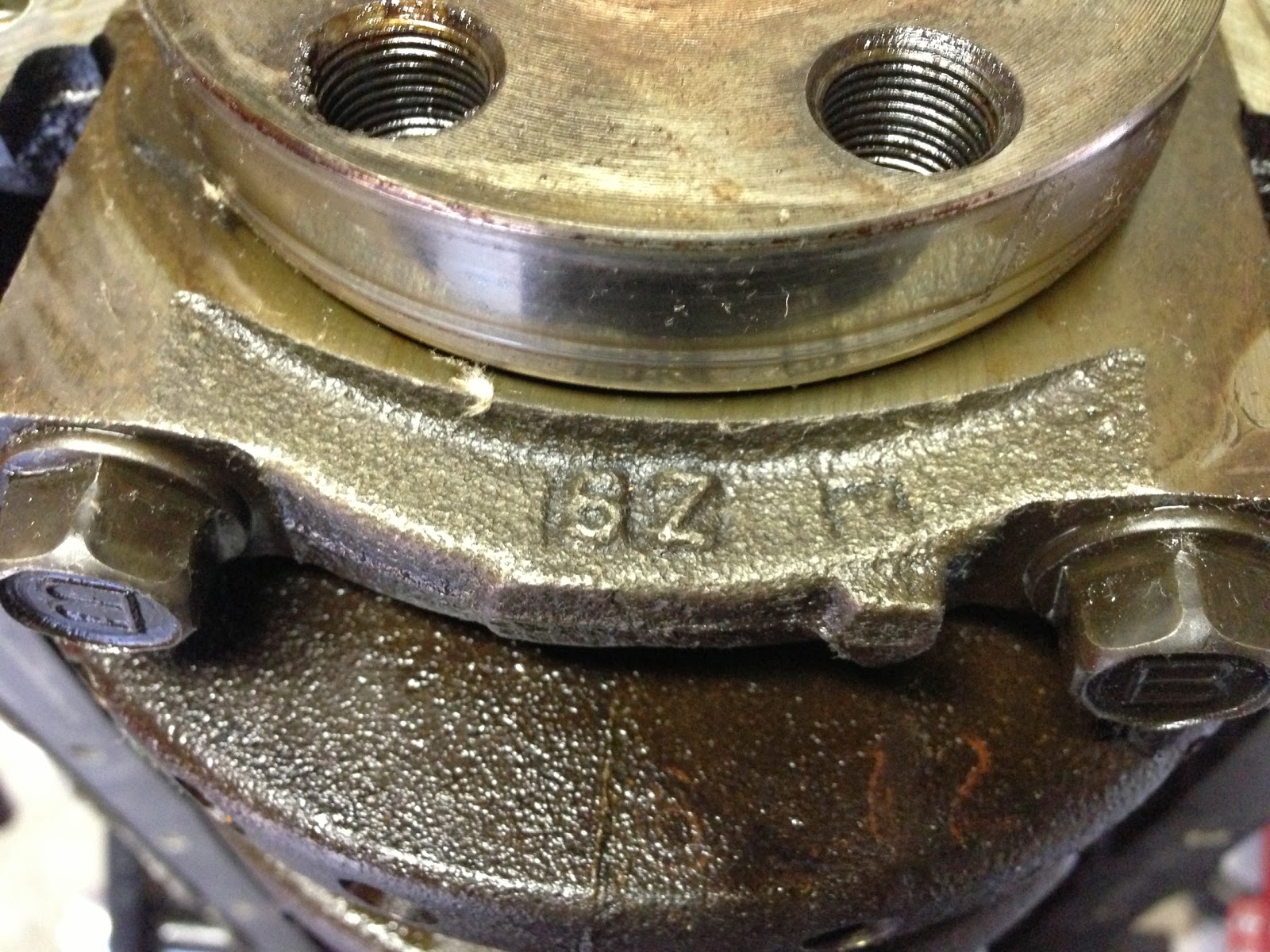 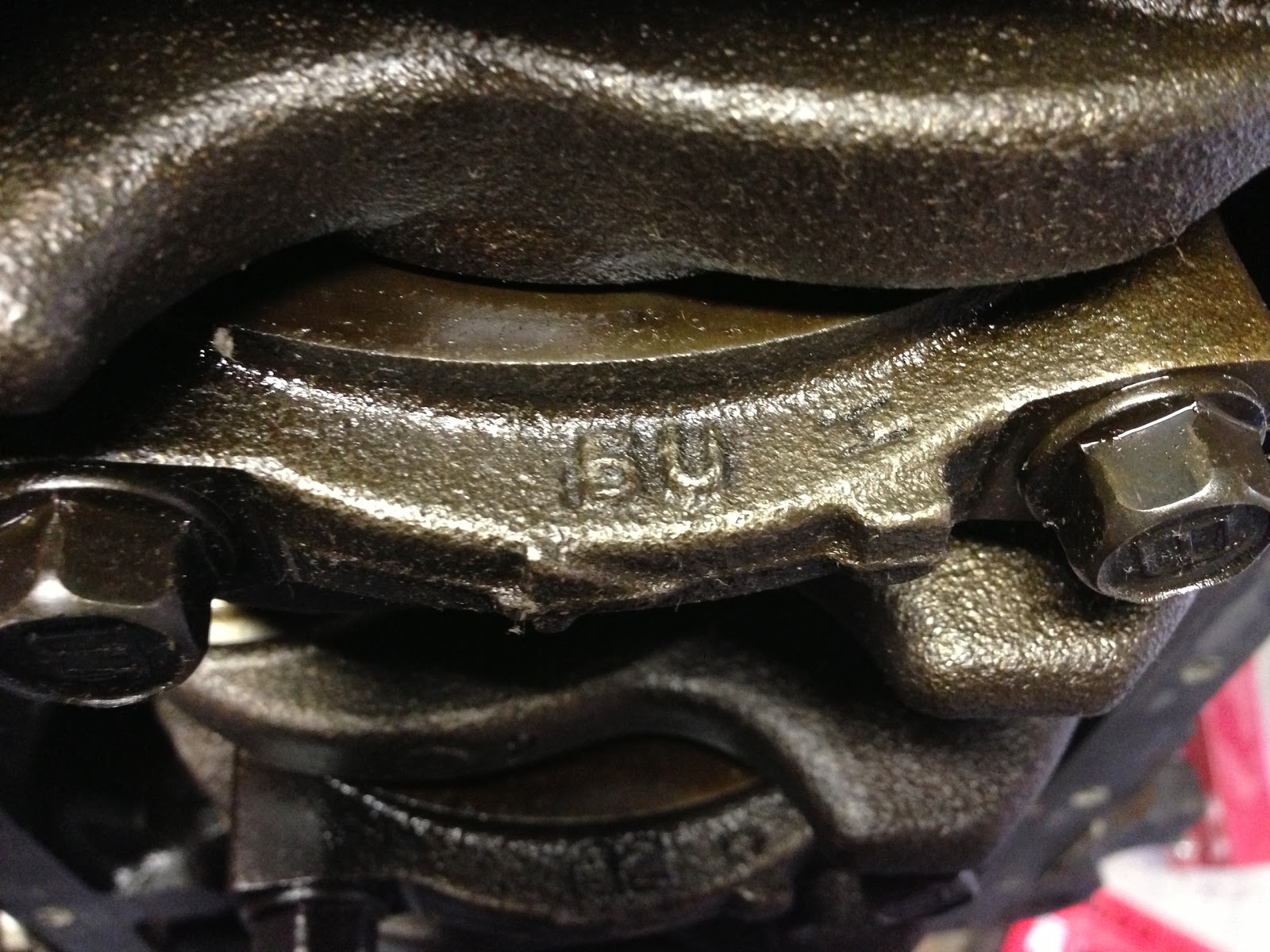 Eventually, we ended up with a bare block.  Well almost.  I removed the oil piston squirters later. 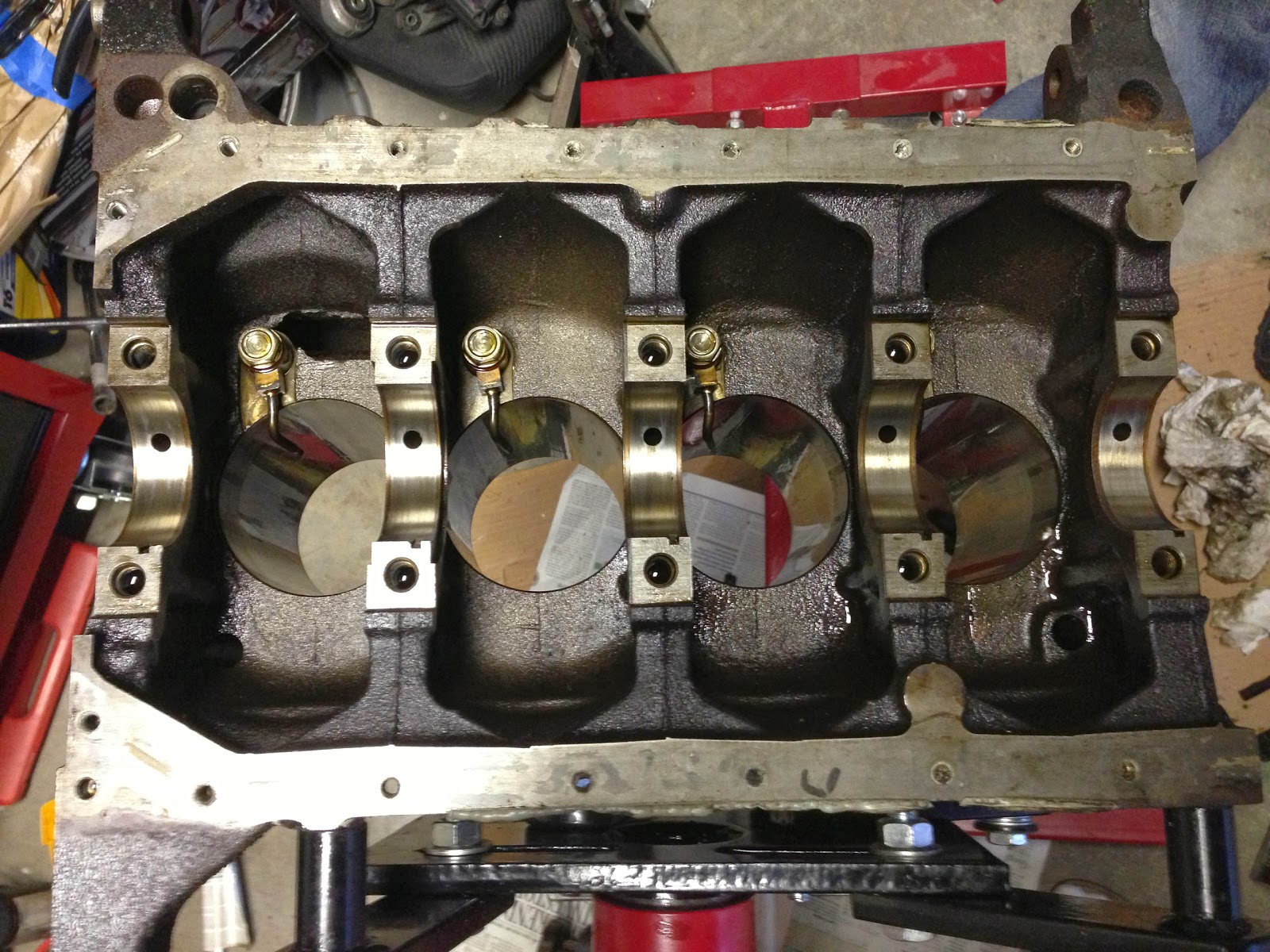 The cylinder walls all looked good.  There were no ridges at the top of the cylinder bores.  The cylinder bores felt pretty smooth.  I'm going to send this out to the machine shop to clean up and measure the bores with their super accurate and expensive bore gauges and then figure out what parts I need to buy.

I need to have a good look at the pistons and the bearings.  I'll post more about those in another post.

Thanks for following along.  Let me know if you have any questions or advice.