I had my car aligned and corner balanced back in January when I finished the build.  A bunch of local winning racers that I met at the track when doing my research and on the MazdaRacers.com forum had recommended that I go to TFB.  Tim F. Barber has won more races and has so many trophies that his shop is absolutely overflowing.  His shop is located at Infineon Raceway.  Tim did a great job on my car at the time.

However since that time, I have had about 5 off track excursions (remember the big spin I told you about at Thunderhill...?).   After the last Laguna race, I removed the wheels, rotated them and washed the car.  While the wheels were off, I noticed that the passenger side tires seemed a bit more worn on the outside than I expected.  I didn't think much of it at the time.  However, when I drove the car over to TC Design when I had Tony build my exhaust.  I noticed that the car didn't feel the same and the steering wheel was slightly turned to the left.

My car is still registered and insured by the way.

Something was obviously wrong and tires are expensive.  I am planning on taking the car into TFB so I can have it aligned and corner weighted again.  In preparation of taking the car to him, I want to do 2 things:
1. Remove some weight.
2. Install a Cool Suite system.

I had my car weighed at Laguna on the Tech Inspectors scales just to check what it weighed in at.  I had half a tank of gas when I weighed the car at TFB the first time.  The fuel gauge was on E so I probably only had 2 gallons of gas in the car.  I weighed in at 2302 with me in the car.  The rules state that minimum weight is 2275 for the 1.6 Miata.  Fuel weighs about 6lbs per gallon so I figured I could stand to loose a bit of weight from the car.

TC Design trimmed material from the doors when they did the cage.  They trimmed enough to fit the dual NASCAR bars on each side so I had a little bit to loose - or so I thought.

There was a recent discussion on Mazda Racers about removing material from the doors:
http://mazdaracers.com/index.php?showtopic=1040
In that discussion, everyone seemed to think that you needed a plasma cutter or air tools to trim the doors.  It sounded a bit over kill when I read that thread.  I had a look at my doors and the sheet metal is really thin and flimsy.  It seemed like it wouldn't be that hard to trim the doors with the tools that I had available.  Remember - I don't have air tools or a welder.  I work on my car in my garage with hand tools that I bought I Sears.

I had some time today and decided to try some weight loss techniques on my driver's door while I was doing laundry.

Have a look at this pic here.  Note that I already removed a rather heavy part in this pic as you can tell by the gray colored area at the top.  I also started cutting out a small triangle of sheet metal in front of the door handle. 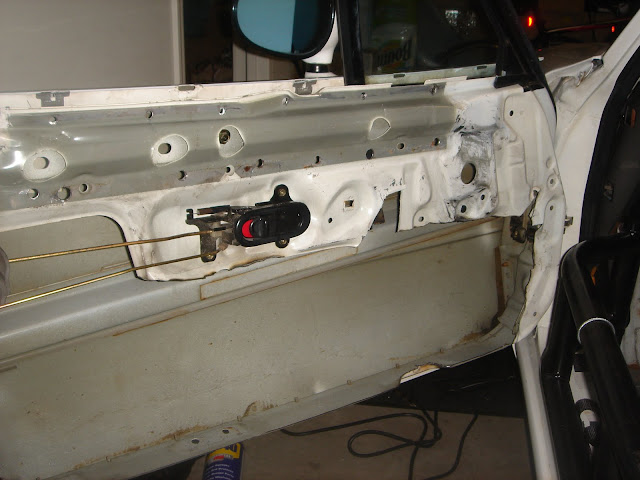 If you look closely, you will notice a series of 1/2" sized holes along the top and bottom of that gray area.  That is where I used my power drill and a Uni-bit to drill out the spot welds and pull that part off.  Check out the pic below of the part removed and the tools I used: 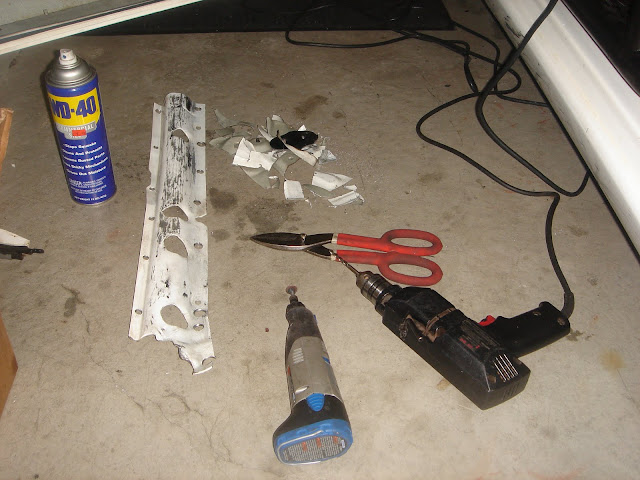 Sorry, the Uni-bit is not pictured.  Do notice that long white piece of sheet metal.  Can you guess how much it weighs?
.
.
.
No?
.
.
That part along weights 2.5 lbs!  Frickin amazing how heavy that part is.  It is rather thick gauge metal and is butted up against some thinner gauge metal.  I was able to remove that using the power drill alone and a screw driver to do a little bit of prying in about 20 minutes. 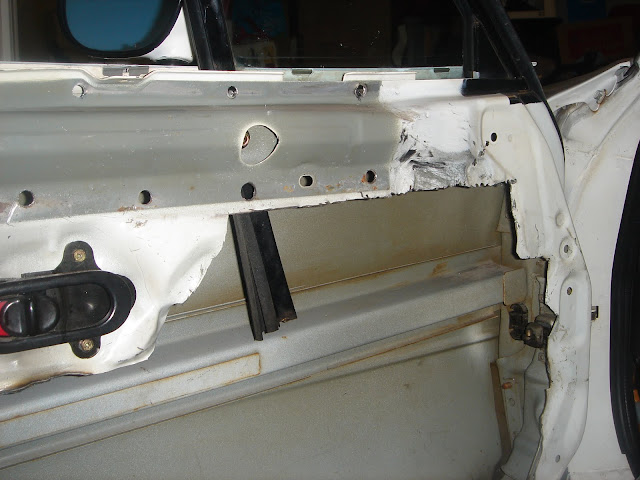 Notice the line where I stopped cutting on the top end.  There is a reason behind that.  That top section is two layer metal spot welded together.  It is actually quite strong.  The sheet metal used for those two layers is nowhere near as thick as the part that I removed.  I left that dual layer area intact and just cut/trimmed the single layer of sheet metal around that section.  I don't need to loose a lot of weight so it really wasn't worth the effort to go crazy cutting stuff out.  Plus the laundry was done. :)

Oh, by the way, that pile of scrap metal didn't even register on the scales so not much to loose there...

I stopped there for today, cleaned up and got the shop vac out to vacuum out all of the metal shards that the drilling created.  If you decide to to this yourself, do wear proper safety equipment.  I wore glasses and gloves and put shoes on once the shards of hot metal started sprinkling down over my sandal wearing feet.  That stuff is HOT.  I also got hit in the face with a decent amount of metal scrap while drilling so do be careful.  Some metal in the eye will result in a trip to the emergency room or worse....  I will drill out that top section that weighs 2.5 lbs from the passenger side during the week as I have time.

Regarding the cool suit, I'm going to try and build my own next weekend.  They retail for about $300.  Judging by some threads floating around the net, I should be able to build my own for about $100.  I'll post up about that when/if I'm able to pull it off.  The temps at the next race at Thunderhill is expected to be in the 90s and 100s!  Gotta keep cool.