I Fabricated a Water Temp Gauge Bracket for the Miata

It is currently September and starting to cool off here in Northern California.  However, in July and August the San Francisco Region SCCA had 2 races scheduled at Thunderhill Raceway.  Those are the hottest months of the year in lovely Willows, CA with temps in the 90s.  I did happen to make the race in July (and did terribly because it was only the second race I've been to all year - more on that in another blog post) and it was HOT.  Miatas aren't particularly difficult to run in hot weather if you have a good radiator but a couple of guys overheated and seized motors.  I decided to install a water temp gauge.  Along with the gauge, I needed a way to mount it.  I decided to fabricate my own bracket.

Why fabricate my own water temp gauge bracket?  Why not just buy one somewhere?


Miatas are dead-nuts reliable cars.  They don't really suffer too much in hot weather compared to other cars.  However, during the race in July I noticed after the race that the Miata's coolant temp gauge had moved a little bit from it's normal position in the center of the range.  Sadly, I couldn't recall when I had last looked at the stock water temp gauge.  Hence my desire to have the gauge front and center.  I also got a cool top of the line Autometer gauge with a warning light that will be impossible for me to miss but more on that in another blog post.

Anyway, here are a couple of pics of version 4 of the bracket.  Yeah, I made 4 prototypes before finally settling on this location. I thought it would be easier and quicker.  I lost count of how many hours it took me to finally get the gauge so that it didn't block redline on the tach and had minimal blockage of the speedometer.  Quite a bit of trial and error.

Check it out.  Look cool?  I'm wondering if I should make a few more and sell them... 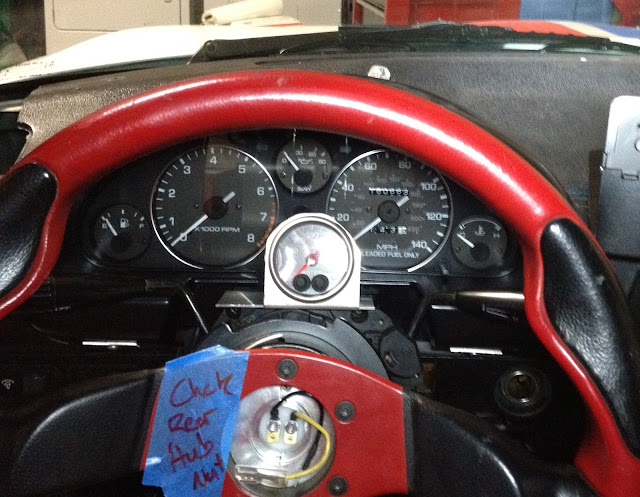 Sorry about the wash-out from the flash and lighting.  I'll get some better pics in the sunlight next race.  Here is a closer view from the side: 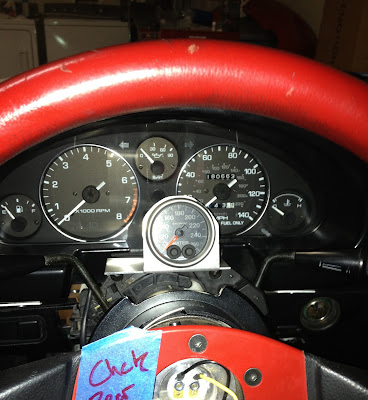